Swoon Now! The Next Day 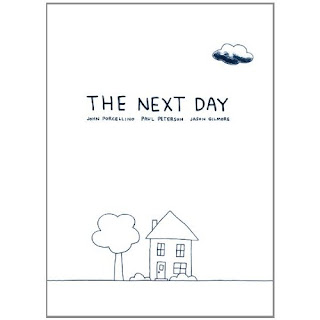 The Next Day (Pop Sandbox) brings together the lives of four people who attempted suicide and tells their stories up to the event ... and beyond.

The stories - collated by writers Paul Peterson and Jason Gilmore - are told concurrently with narration-style quotes from the people themselves in a very direct way that, coupled with John Porcellino's deceptively simple drawing style avoids melodrama or any attempt to look for complex answers or to draw any parallels. This could be a tale for children an idea which is strengthened by the recurring images of a storm over a house and playground. 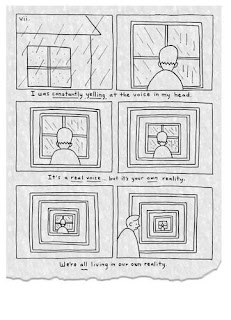 As the back cover states, nearly one million people die from suicide and more than twenty times that amount make an attempt. Each tale in The Next Day is unique compared to the other three but there is nothing to suggest they happen due to particularly extraordinary events; it could be happening to your neighbour or colleague.

There have been a few graphic novels that delve into the topic of mental illness and this quietly affecting, rather brilliant piece of work deserves to be at the forefront.


The Next Day - Trailer from Pop Sandbox on Vimeo.


There are plans this month for the project to become an interactive animated experience so it'll be worth keeping an eye on the website (see here) for a chance to explore the case histories in greater depth along with John Porcellino's animation. If you're curious about the life of an indie comics artist, Porcellino is diligent when it comes to the upkeep of his blog (see here) posting plenty of photographs.

As a footnote; beware the almost entirely white cover as it captures your fingerprints, but somehow that seems appropriate.
Posted by Daves Comics at 12:48 pm