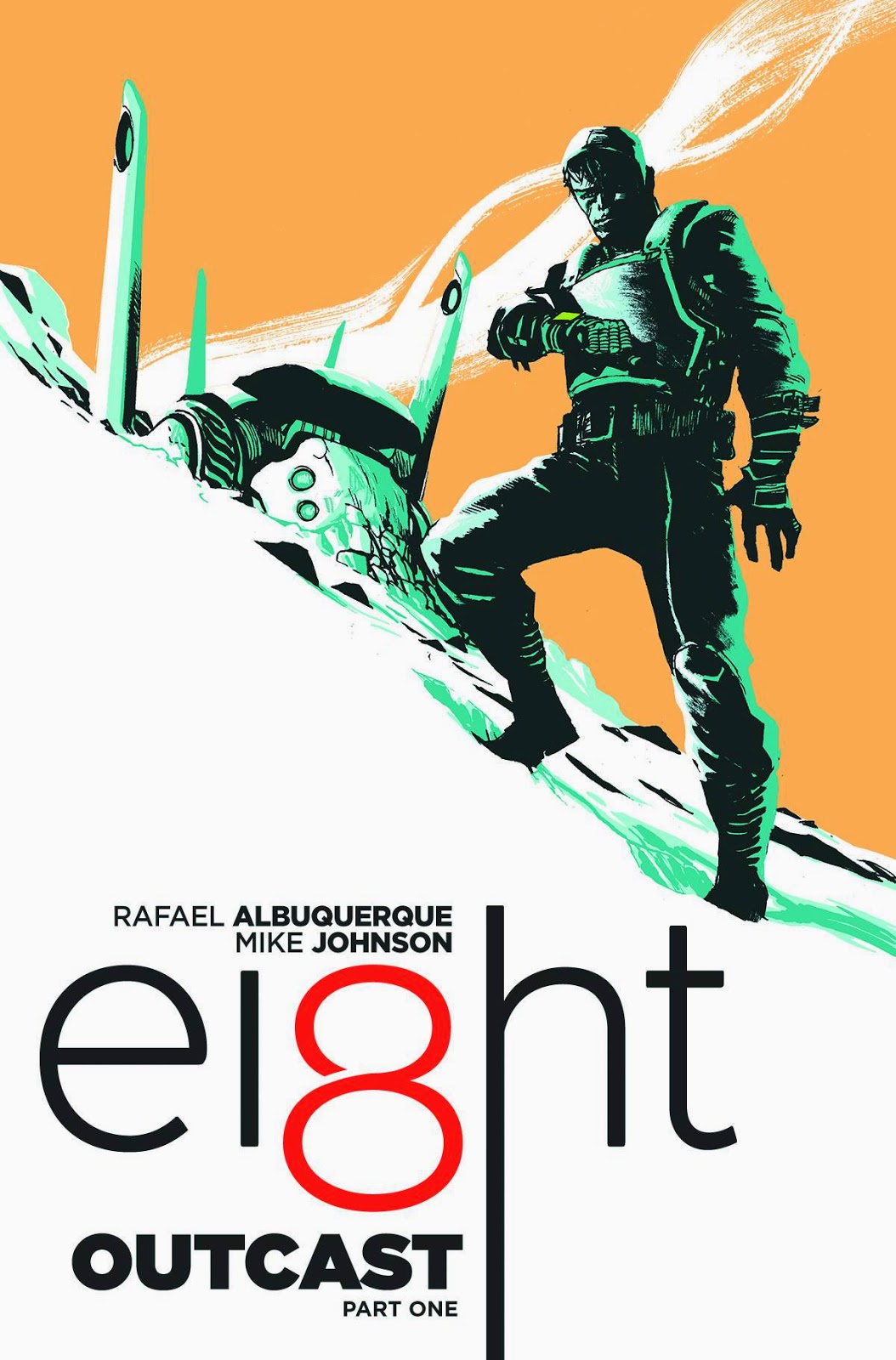 It's a light meal but some interesting flavors... 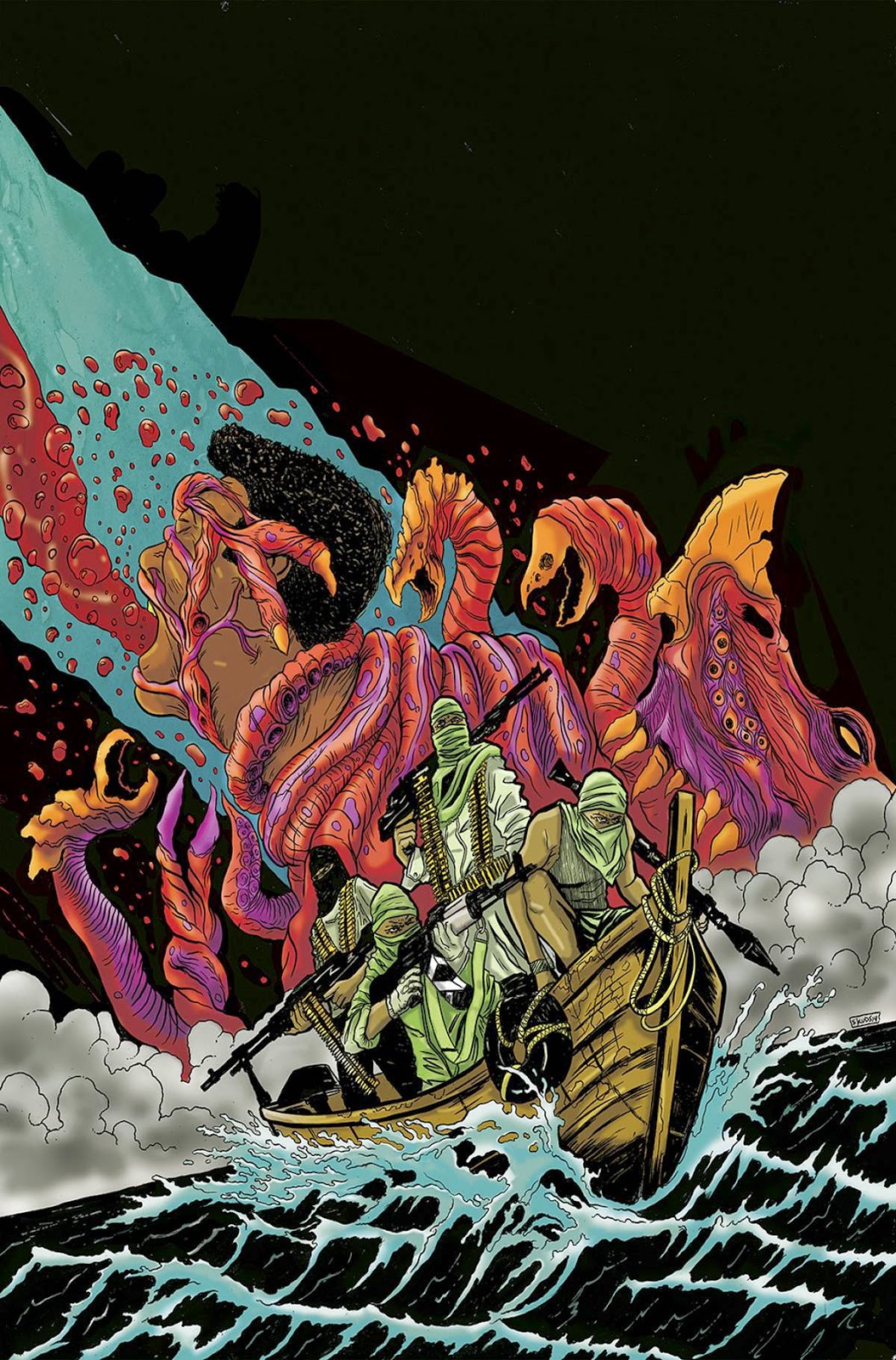 PLUNDER #1
(W) Swifty Lang (A/CA) Skuds McKinley
WHY WE LOVE IT: Swifty Lang gave us a whole new look at werewolves with Feeding Ground, a terrifying tale packed with social commentary. When he told us he'd teamed up with newcomer Skuds McKinley for a story of horror on the high seas, we were all in.
WHY YOU'LL LOVE IT: BOOM! Studios and Archaia have been at the forefront of the horror comics revival, with titles like Feeding Ground, Curse, and Clive Barker's Next Testament. Plunder is the next step in that evolution, as fans of Captain Phillips and The Thing will enjoy this mix of current events-inspired adventure and supernatural terror.
WHAT IT'S ABOUT: After facing off with an illegal Chinese vessel, a gang of Somali pirates tries to board what they think is a research vessel, only to find themselves in the midst of a massacre. As their worst nightmares become reality, the 14-year-old boy who went from translator to reluctant pirate not only becomes the key to survival, but must decide for himself how far he is willing to go in the name of self-preservation.
SUICIDE RISK #22

EI8HT #1
(W) Rafael Albuquerque, Mike Johnson (A/CA) Rafael Albuquerque
Welcome to the Meld, an inhospitable dimension in time where Joshua, a chrononaut, finds himself trapped. With no memory or feedback from the team of scientists that sent him, he can't count on anything but his heart and a stranger's voice to guide him to his destiny.
GROO FRIENDS AND FOES #2
STRAIN NIGHT ETERNAL #6 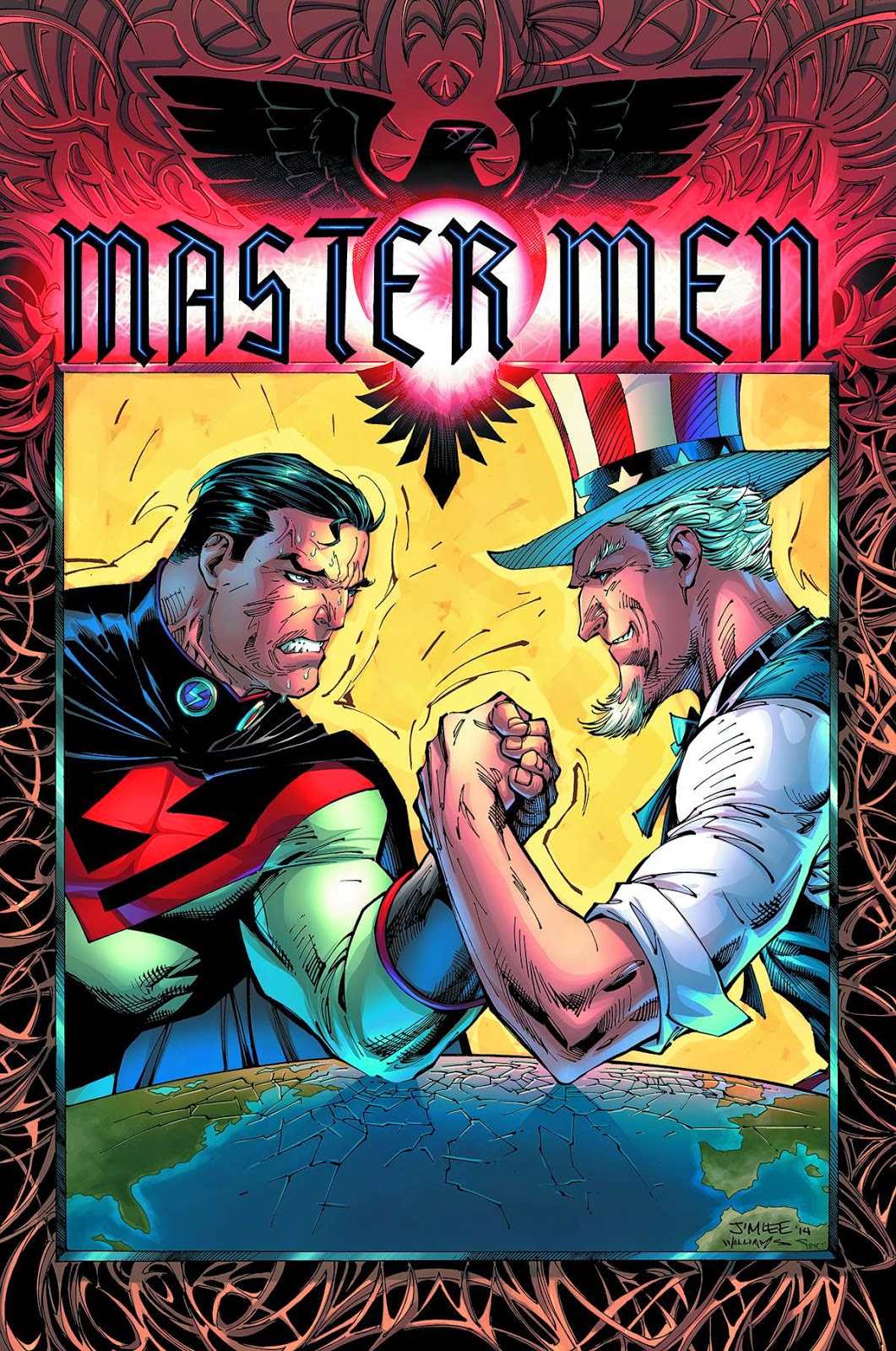 MULTIVERSITY MASTERMEN #1
W) Grant Morrison (A/CA) Jim Lee, Scott Williams
Superstar writer Grant Morrison joins legendary artist Jim Lee on Earth-10 for one of the most dynamic, action-packed issues of this entire world-shattering series - THE MULTIVERSITY: MASTERMEN!
Imagine a world where the Nazis not only won World War II but went on to direct world culture for the next 60 years with the help of an orphaned, alien super-weapon known as Overman! But hope is not lost! Rising from the ashes of oppression are a diverse band of heroes raging against the fascist regime - a band of heroes known as THE FREEDOM FIGHTERS!
What nightmarish parallel worlds haunt the dreams of Overman? Who is the mysterious figure called Uncle Sam? And when the dust settles, will the actions of Phantom Lady, Black Condor, Human Bomb, Doll Man and The Ray be enough to stop Leatherwing, Blitzen and the other "heroes" of Earth-X?
Learn all this and more in this exciting issue that acts as chapter seven of the critically acclaimed MULTIVERSITY storyline.
NEW 52 FUTURES END #42
RED HOOD AND THE OUTLAWS #39
SENSATION COMICS FEATURING WONDER WOMAN #7
SUPERGIRL #39
SUPERMAN WONDER WOMAN #16
TEEN TITANS #7
TEEN TITANS GO #8
TRINITY OF SIN #5
WONDER WOMAN #39 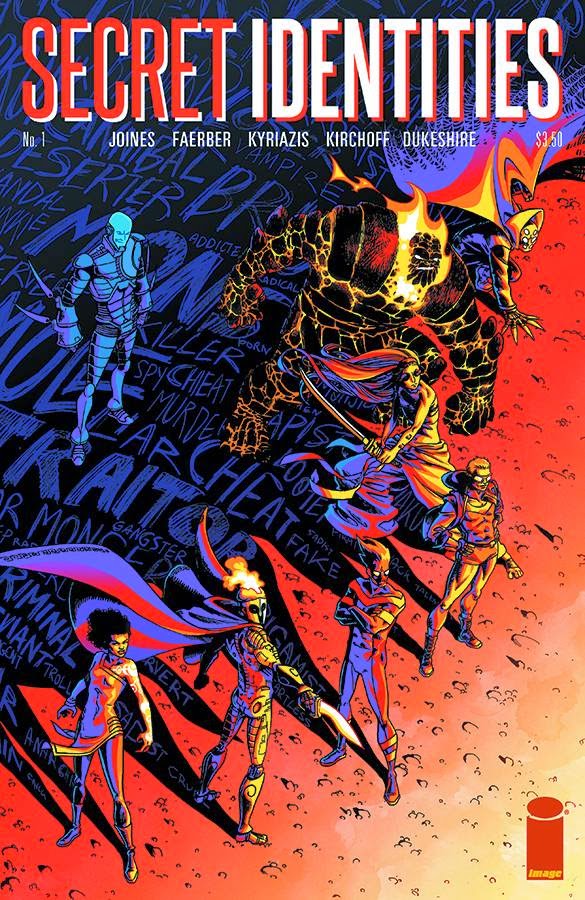 SECRET IDENTITIES #1
(W) Brian Joines, Jay Faerber (A/CA) Ilias Kyriazis, Charlie Kirchoff
The supergroup known as The Front Line have just invited new hero Crosswind to join them. But what they don't know is that Crosswind is a mole, sent to learn all their secrets. And the Front Line have LOTS of secrets.

Writers BRIAN JOINES and JAY FAERBER and the stunning art team of ILIAS KYRIAZIS and CHARLIE KIRCHOFF bring you classic super-team action and intrigue for the 21st century.

Behind every mask is a secret...
SPARKS NEVADA MARSHAL ON MARS #1 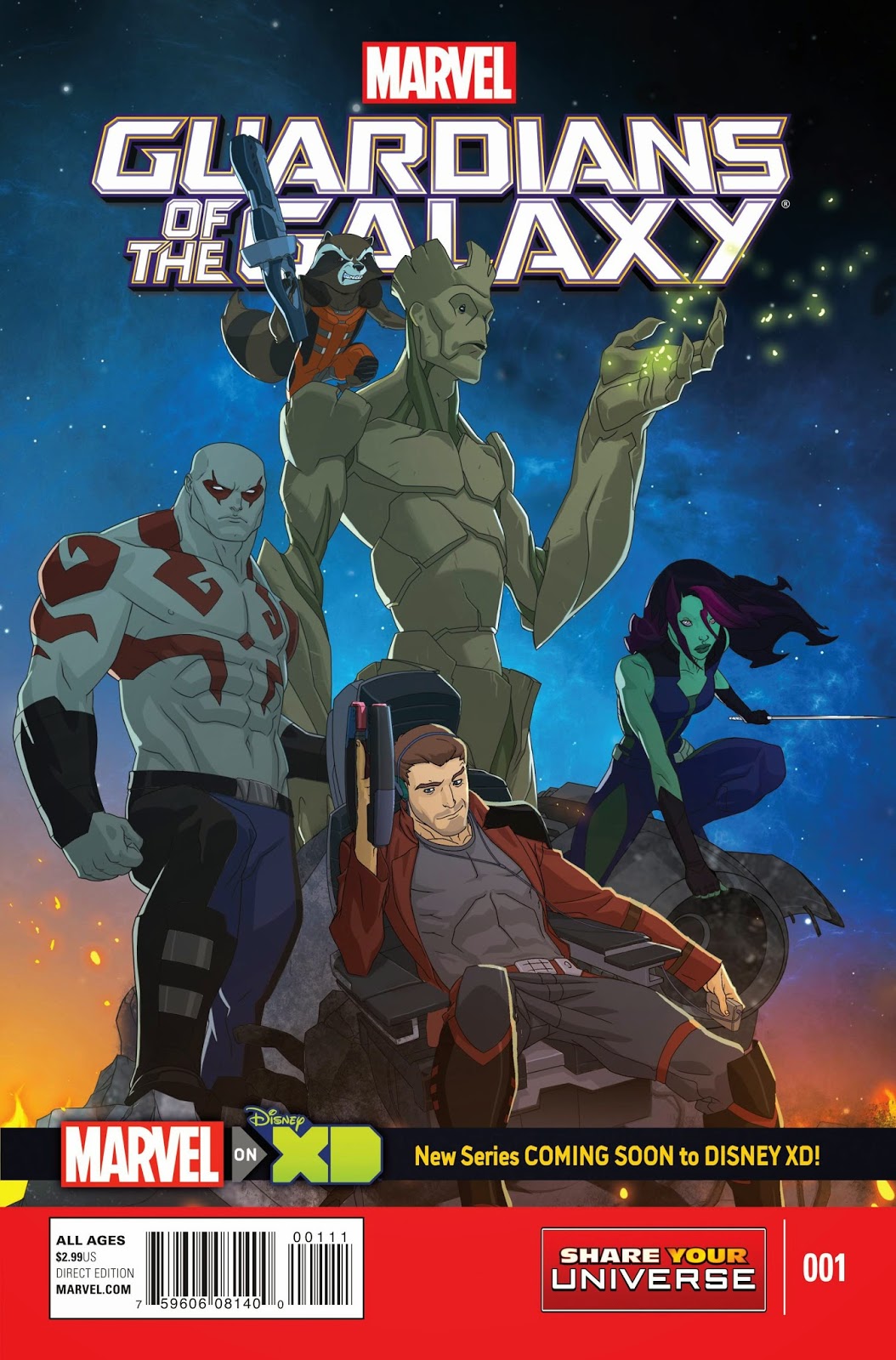 MARVEL UNIVERSE GUARDIANS OF GALAXY #1
(W) Joe Caramagna, Mairghread Scott (A/CA) Adam Archer
• Based on the highly anticipated new series coming to Disney XD in 2015, follow the further adventures of the Guardians of the Galaxy!
•  With a galaxy full of danger, only the Guardians stand between us and the destruction of everything!
•  Featuring adaptations of the upcoming animated series with a mix of screen grab and brand new stories for everyone to enjoy!
MILES MORALES ULTIMATE SPIDER-MAN #10
MOON KNIGHT #12
MS MARVEL #12
NOVA #27
ROCKET RACCOON #8
SHE-HULK #12
SHE-HULK #12 ANKA FINAL ISSUE VAR 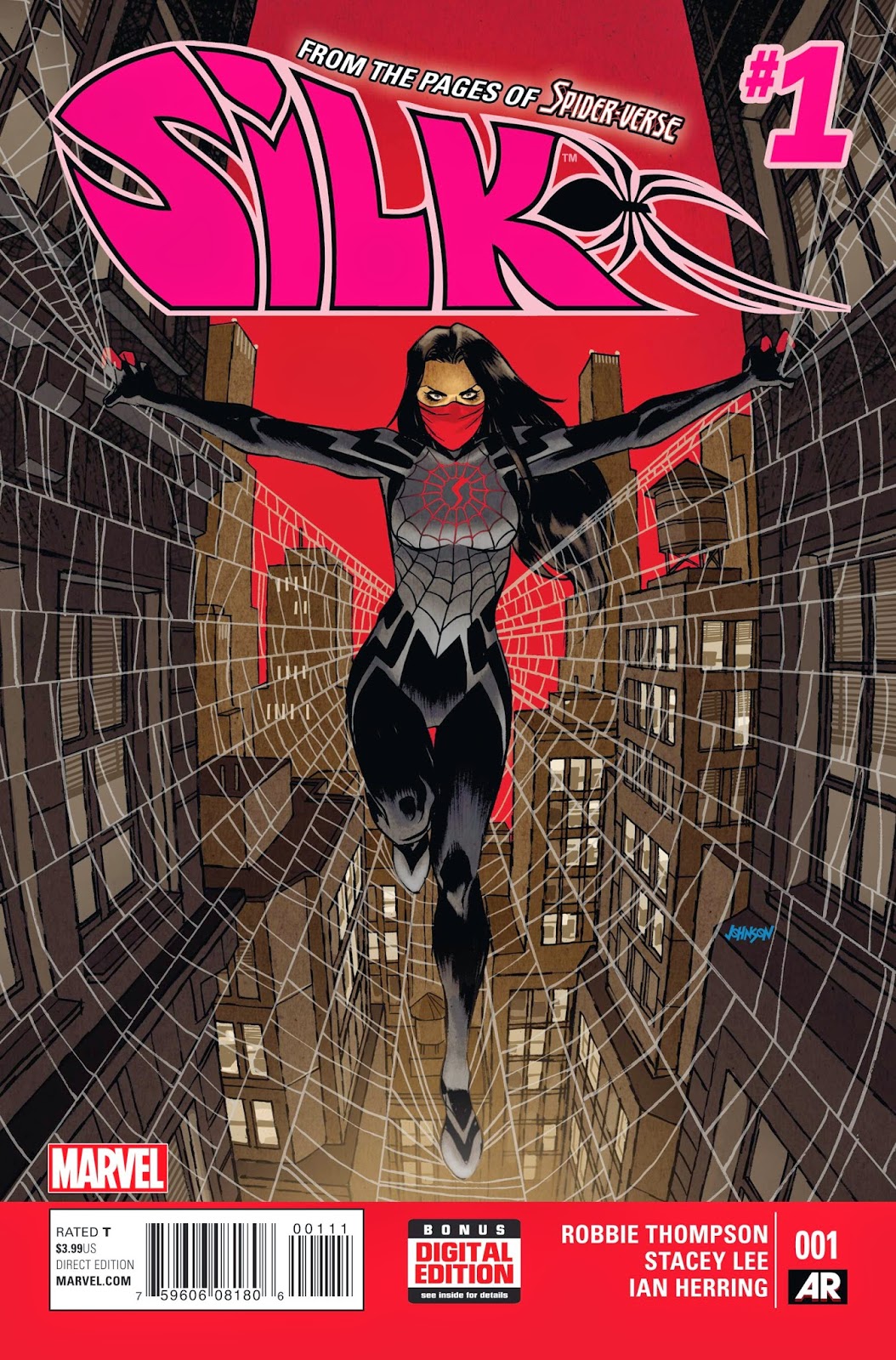 SILK #1
(W) Robbie Thompson (A) Stacey Lee (CA) Dave Johnson
Cindy Moon exploded out of her bunker and into the Marvel Universe when we first learned that she had been bitten by that same radioactive spider in the first arc of AMAZING SPIDER-MAN. She then went on to save Peter Parker's life (more than once!) and traverse the Spider-verse alongside Spider-Woman. Now, as SILK, Cindy is on her own in New York City, searching for her past, defining her own future, and webbing up wrong-doers along the way! Robbie Thompson (writer from TV's Supernatural) fills this new ongoing series with his unique blend of antics and feels. Featuring stunning covers by Eisner Award winner Dave Johnson and interiors by future superstar Stacey Lee.
Rated T
SILVER SURFER #9
STORM #8
UNCANNY X-MEN #31
WOLVERINES #7