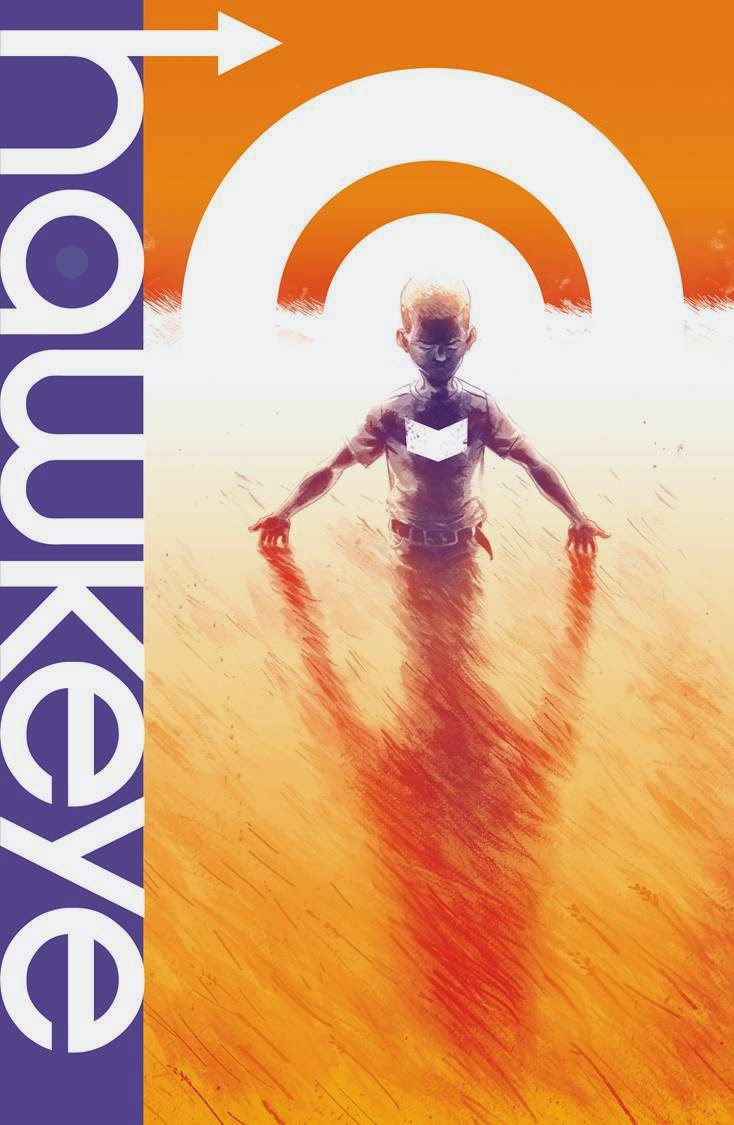 Morning morning morning!
another brief introduction to this weeks gems as the good ship Dave's is a number of hands down and I've yet to hoist the sail let alone scrub the deck or polish the plank.
See you high tide!
x 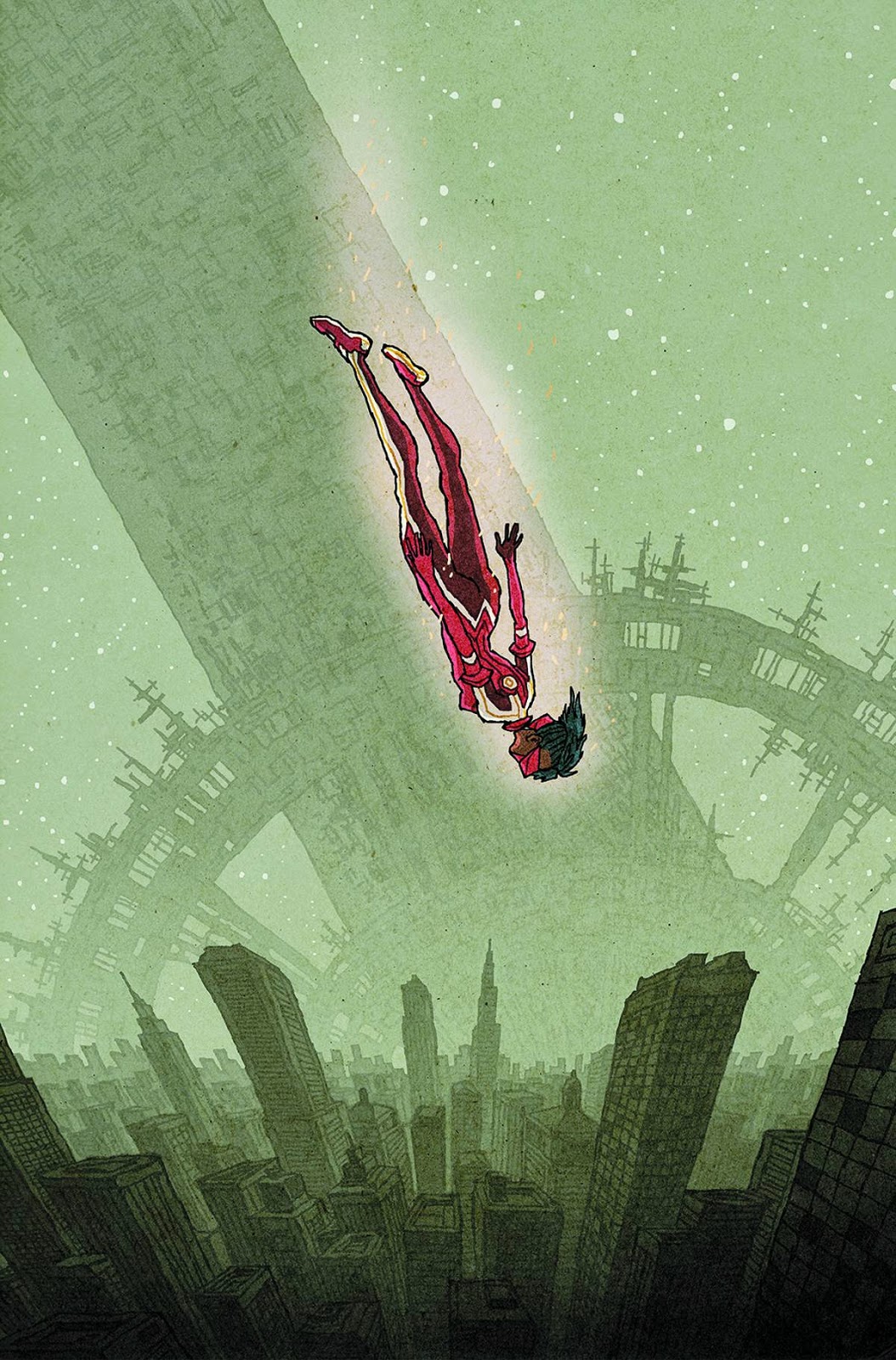 Publisher: BOOM! STUDIOS
(W) Josh Tierney (A/CA) Afu Chan
WHY WE LOVE IT: We've published four books thus far in Josh Tierney's Spera series because we simply love his characters and storytelling. Now, he teams up with fellow webcomic creators Afu Chan (Spera) and Giannis Milonogiannis (Old City Blues, Prophet) for a new creator-owned,
sci-fi adventure.
WHY YOU'LL LOVE IT: Having first collaborated on the Eisner Award-nominated Spera series, the creative team behind HaloGen is no stranger to kickbutt ladies, epic world-building, and sweeping adventures. This time they're strapping on their sci-fi boots for a series perfect for fans of Prophet, Rocket Girl, and The Fifth Element.
WHAT IT'S ABOUT: There's a rumor on Cityship Q that the gigantic body of a dead god was found floating in space. Rell, an agent woking for the HaloGen organization, is tasked with finding the location of the god and retrieving it by any means necessary. Using her ability to form hyperrealistic holograms, Rell is about to take on the first mission she might not be able to finish.
ROBOCOP 2014 #9 (MR)
WOODS #11
BOUNDLESS
LADY DEATH APOCALYPSE #2 (MR)
DARK HORSE
ANGEL AND FAITH SEASON 10 #12 MAIN CVR
HELLBOY AND THE BPRD #4 (OF 5) 1952
LADY KILLER #3 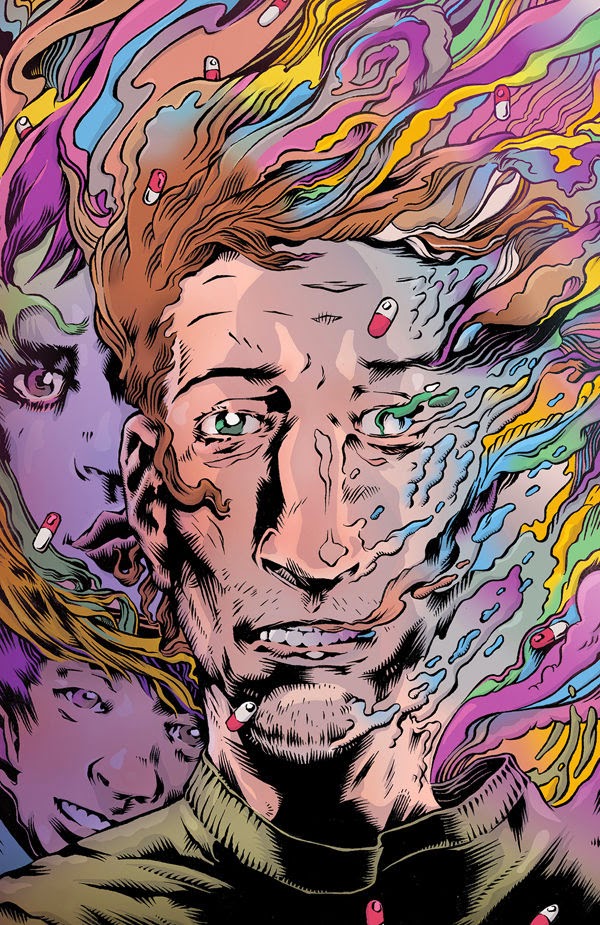 Publisher: DARK HORSE COMICS
(W) Shaun Simon (A) Tyler Jenkins (CA) Conor Nolan
Most people take drugs to escape reality. Neverboy, a former imaginary friend, does the opposite. He's found a loophole that allows him to stay in the real world. As long as he stays medicated, everything's perfect. But when the drugs wear off and reality fades, the forces that guard the borders between the real and the imaginary will be ready to drag him back to where he belongs.
RAT GOD #2 (OF 5)
DC
AQUAMAN AND THE OTHERS #11
BATMAN ETERNAL #48
DETECTIVE COMICS #40
EARTH 2 #32
EARTH 2 WORLDS END #22
FLASH SEASON ZERO #6
GRAYSON #8
GREEN ARROW #40
GREEN LANTERN #40
HARLEY QUINN #15
HINTERKIND #16 (MR)
INFINITY MAN AND THE FOREVER PEOPLE #8
JUSTICE LEAGUE 3000 #15
LOBO #6
NAMES #7 (OF 9) (MR)
NEW 52 FUTURES END #44 (WEEKLY)
SWAMP THING #40
WOLF MOON #4 (OF 6) (MR)
DYNAMITE
ALTERED STATES VAMPIRELLA ONE SHOT
ARMY OF DARKNESS VOL 4 #4 (OF 5) 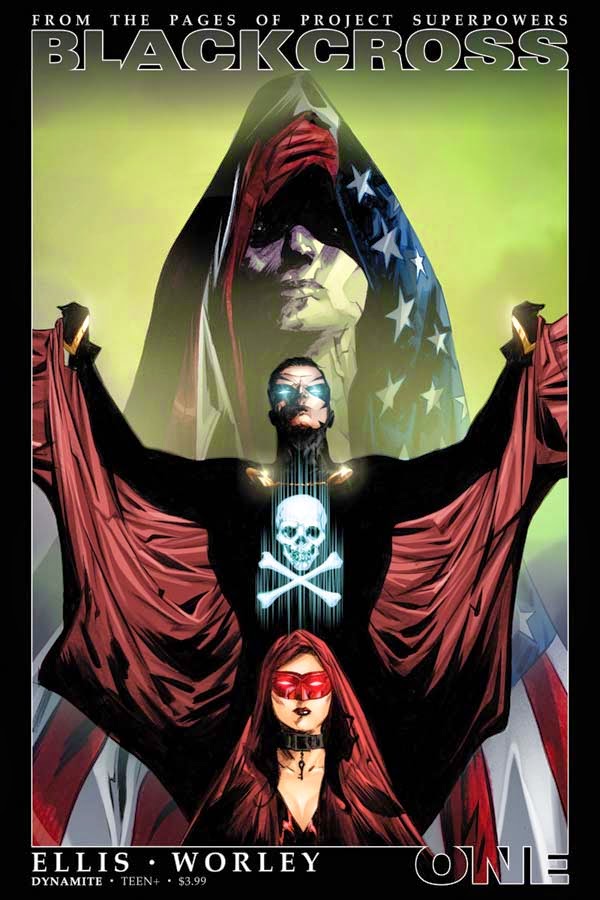 (W) Warren Ellis (A) Colton Worley (CA) Jae Lee
All small towns have secrets.  All small towns have ghosts.  Blackcross, in the Pacific North West of America, has more secrets than most.  And it is being haunted by something impossible.  BLACKCROSS, a supernatural extension of the PROJECT SUPERPOWERS mythos, is a ghost story about something reaching out from the other side of the night, through the forest and mist of this remote town, to grasp at the hearts of a handful of people who may not find out that they're the targets of a strange killer until it's much, much too late.
BLOOD QUEEN VS DRACULA #1 (OF 4) CVR A ANACLETO MA
BSG DEATH OF APOLLO #4 (OF 6) CVR A MAYHEW MAIN
IDW
GI JOE (2014) #6
GODZILLA RULERS OF THE EARTH #21
MY LITTLE PONY FRIENDS FOREVER #14 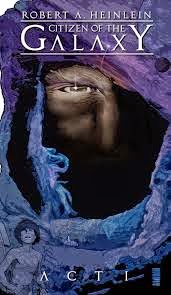 ROBERT HEINLEINS CITIZEN OF THE GALAXY #1 (OF 3)


Just outside our galaxy the atrocities of slavery thrive, and young Thorby is just another orphaned boy sold at auction. But when he crosses paths with a mysterious crippled beggar, his destiny is forever changed. Citizen of the Galaxy is an interstellar action/adventure coming of age tale by the "Dean of Science Fiction"... Robert A. Heinlein! 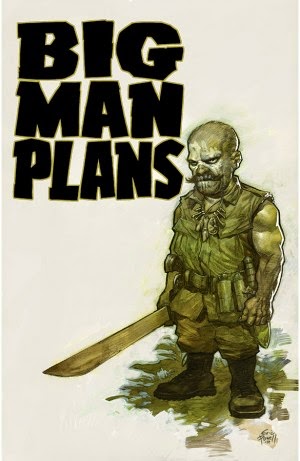 (W) Eric Powell, Tim Weisch (A/CA) Eric Powell
From ERIC POWELL (Eisner award-winning creator of The Goon) and TIM WEISCH (a guy who used to be a bricklayer) comes BIG MAN PLANS, a brutal crime drama with a shocking mystery at its heart. Even the most marginalized in society can exact revenge if they don't care how they do it.
BLACK SCIENCE #12 CVR A SCALERA & DINISIO (MR) 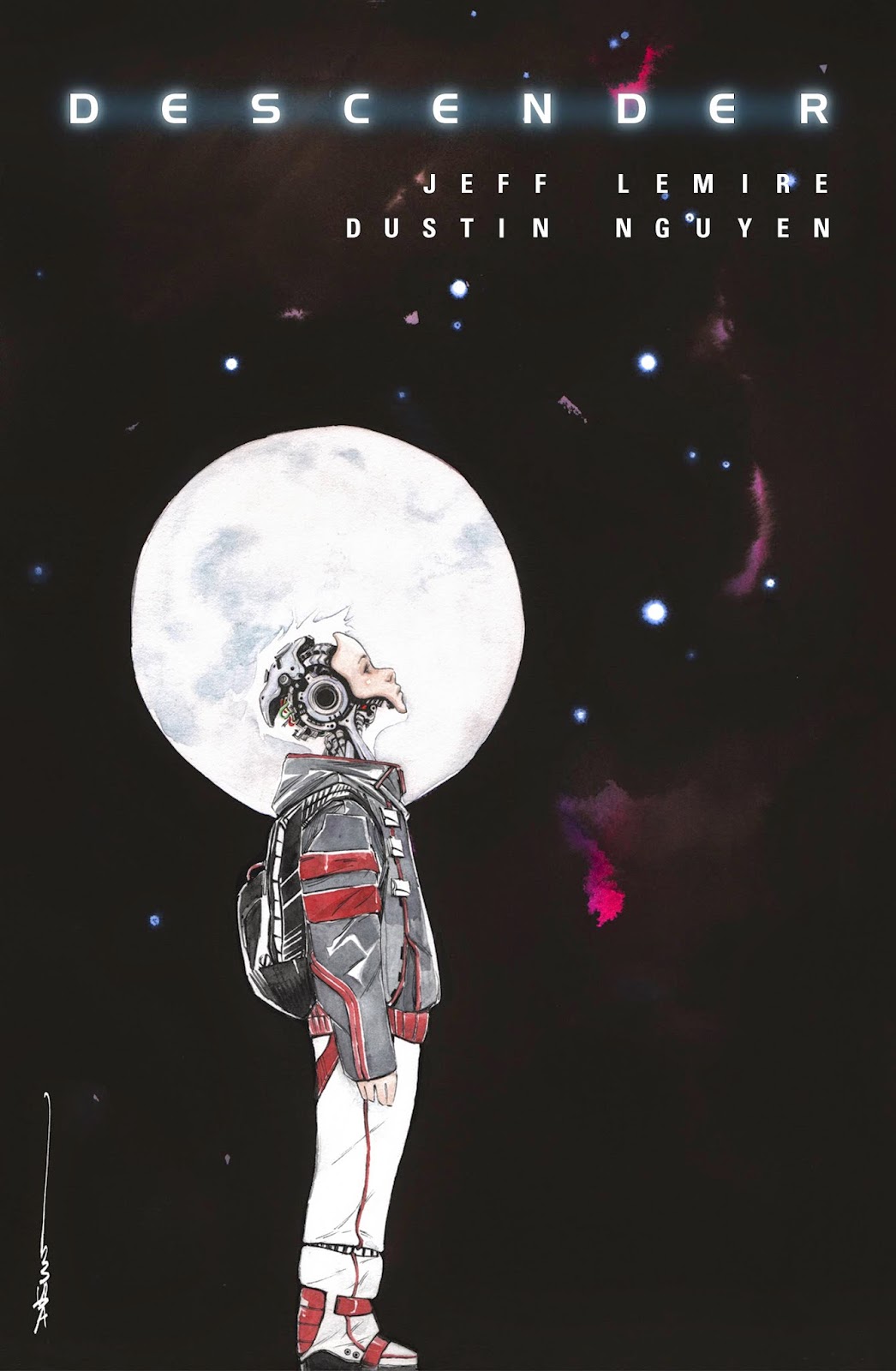 DESCENDER #1 CVR A NGUYEN (MR)
(W) Jeff Lemire (A/CA) Dustin Nguyen
One young robot's struggle to stay alive in a universe where all androids have been outlawed and bounty hunters lurk on every planet.

A rip-roaring and heart-felt cosmic odyssey that pits humanity against machine, and world against world, to create a sprawling space opera from the creators of Trillium, Sweet Tooth, and Little Gotham. 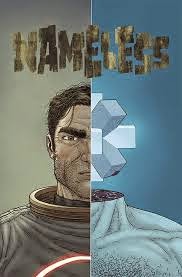 ALL NEW HAWKEYE #1
Publisher: MARVEL COMICS
(W) Jeff Lemire (A/CA) Ramon K. Perez
• Hawkeye returns in an all-new series featuring superstar writer Jeff Lemire in his Marvel debut and Eisner Award-winning artist Ramon Perez, as they bring you a fresh new look into the life of everyone's favorite Avenger. With Kate Bishop, his trusted ward and protégé back at his side (not titles she would use), Team Hawkeye is thrown into an all new adventure spanning two generations of avenging archers. Past and present lives collide as Kate and Clint face a threat that will challenge everything they know about what it means to be Hawkeye. 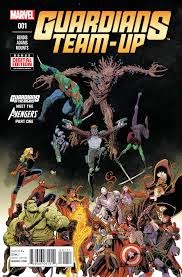 GUARDIANS TEAM-UP #1
Publisher: MARVEL COMICS
(W) Brian Michael Bendis (A/CA) Arthur Adams
GUARDIANS OF THE GALAXY and THE AVENGERS!
•  Launching directly out of Guardians of the Galaxy comes the new ongoing series bringing the Guardians to the Marvel Universe's grandest stage for an opening arc of out-of-this-world adventures with some of the biggest hitters Marvel has to offer.
•  Kicking off with a cosmic threat so massive, it'll take more than just the Guardians of the Galaxy to stop it! Assembled side by side with the mighty Avengers, prepare for two titanic teams to unite like you've never seen before! 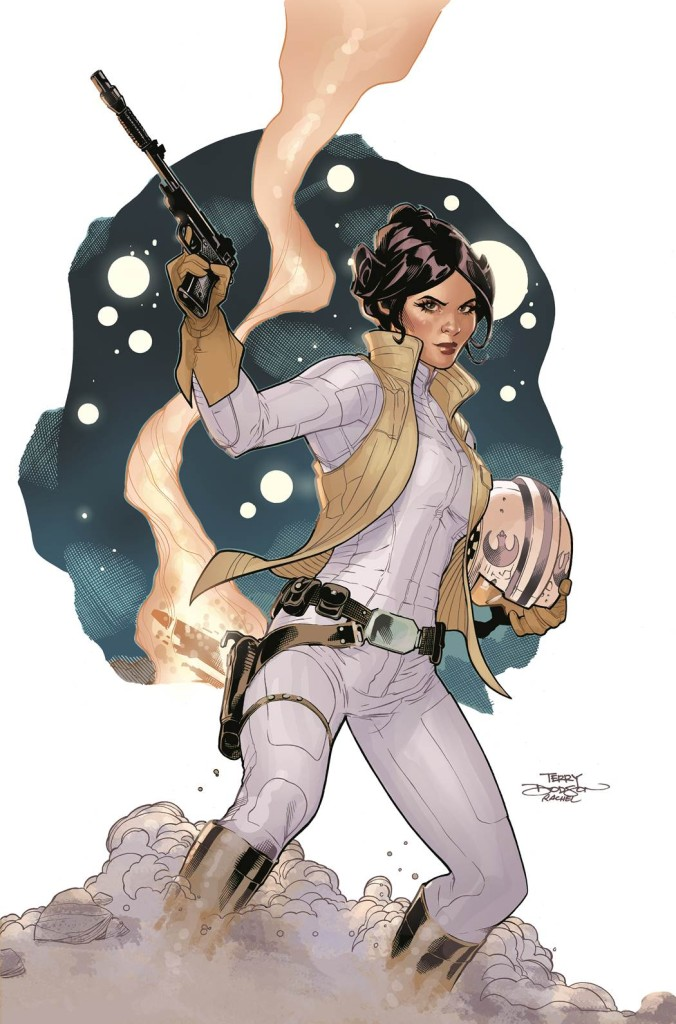 PRINCESS LEIA #1 (OF 5)
Publisher: MARVEL COMICS
(W) Mark Waid (A/CA) Terry Dodson
• When Princess Leia Organa was captured by the Empire as a Rebel spy, she never betrayed her convictions, even in the face of the complete destruction of her home world, Alderaan. When her rescue came, she grabbed a blaster and joined the fight, escaping back to the Rebel Alliance and helping strike the biggest blow against the Empire-the destruction of the Death Star. But in the aftermath of that victory, the question remains...what is a princess without a world?
•  Writer Mark Waid (Daredevil, S.H.I.E.L.D.) and artist Terry Dodson (Avengers & X-Men: Axis, Uncanny X-Men) bring us a story of Leia's quest to help her people and find her place in the galaxy.
Rated T