“I will give you the fire… but you must give me something in return. Something valuable.” 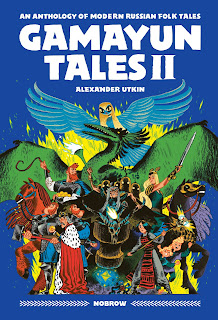 Folklore tales can feel like a series of odd, logic-defying events where the focus is on what peculiar thing happens next, rather than the modern leaning towards story arcs and character motivation. For Gamayun Tales II (Nobrow), Alexander Utkin continues to adapt Russian folklore with warmth and charm creating a world where the magical and seemingly haphazard can occur believably and with measured pacing.

Collected in this volume are two stories narrated by the human-faced bird Gamayun. The first features a young girl seeking life-saving fire from the legendary witch Baba-Yaga and in the second a quest falls to sons of a dying King who needs magical golden apples. Both tales feature not only a similar starting premise, but also many familiar elements of fairy stories, however Utkins treads the line perfectly between not straying from what’s comforting in those tropes, and also making them feel freshly presented. 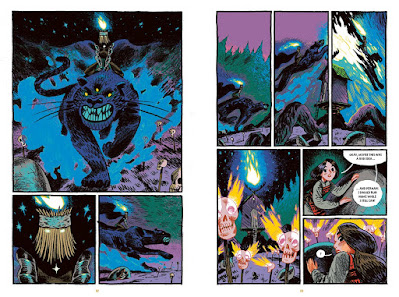 The coloured-pencil-style art is all ages friendly with flowing lines and bold, rich colouring, with perfectly clear storytelling and a style that feels classical. This is important because the other aspect of old folk tales is that they are often littered with dark moments whereas nowadays All Ages stories tend to be a little less disturbing. Through the art and story focus, Utkins handles this perfectly and while Gamayun warns at the beginning that “Sometimes my tales may appear a little scary. But I’d rather say exciting”, the true measure of his approach comes in the epilogue to the first story which ends on a final page which manages to be both dark and yet beautifully poetic (don't worry, I won't spoil it). 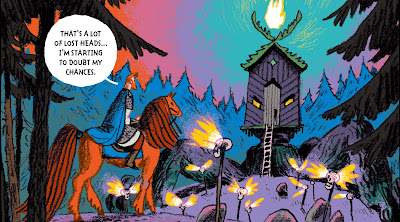 One last point; it's lovely how all the folk tales cross over with one another - whether it be a character or item - and each story has points at which a new story can start. The Gamayun then promises to tell the reader that story some other time - it gives a sense of overflowing stories tumbling out of the book.