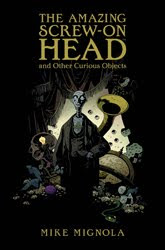 What would the Hellboy books be like if Mike Mignola took Hellboy's subversive wit (you know the drill: nastiness introduced, Hellboy investigates, cuts a few jokes and then starts punching things) and used it as the tone for the whole story?

Welcome to The Amazing Screw-On Head & Other Curious Objects (Dark Horse). The Amazing Screw-On Head was originally published in 2002 and won an Eisner award for best humour publication (humour!!?). Long standing Mignola fans already know all about it of course and talk about with a tear in their eye and it was even adapted into animated form (trailer below). All from a story that started out as an idea for a toy: A robot head with a screw-thread neck attaches to robotic bodies and carrys out missions on behalf of President Lincon. It walks a fine line really almost reading like a pastiche of a Hellboy story which, if it had been too silly or cutting could have undermined the work he was famous for. Instead Mignola retains the sombre gothic tone that he does so well in the art - cut aways to ruined architecture, devil-like beasts - and leaves the comedic moments to the writing and pacing so when you flick through the book it looks like a regular gothic horror story but when you read it you realise that the ideas are just too mad to be taken seriously. Yes, some of the comedy comes from a familiarity with his other work but anyone will raise a smile from lines like: "It's a turnip, but my instruments indicate that there's a small parallel universe inside!" and the fact that Mr Dog (a three legged dog) leads our heroes to where they wish to go like a cross between Lassie and a sat-nav device.

The other stories in the book are a mixture in tone, from the touching Eisner Award winning (for best short story) The Magician and the Snake, the amusing, previously published but now re-drawn Abu Gung and the Beanstalk and finally two NEW, more playful stories. So there you go. Two Eisner award calibur stories, one of which is somewhat of a classic, one re-drawn story, two new stories, a gallery, plus notes and sketches all between a hard cover and for the price of a regular Hellboy book. Great Stuff.

The Amazing Screw-On Head and Other Curious Objects is £13.50.