Weekly Treats! The Isle of 100,000 Graves & Congress of the Animals 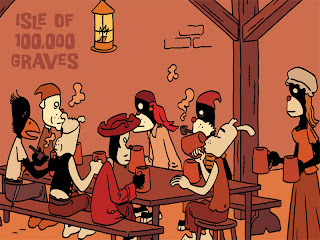 I have to say that Fantagraphics have planted a flag squarely in the middle of this week. Oh yeah; they own this one, baby.

Firstly there's The Isle of 100,000 Graves (Fantagrphics) drawn by Jason although it's the first of his books not to be written by him. Instead he's joined by Fabien Vehlmann for a Pirate romp about a girl and her pirate gang as they search for the island and its legendary treasure. However the island is also home to a school for executioners and torturers always on the look out for passers-by on which to hone their skills. Unsure of the tone just by the description? Welcome to the world of Jason who has become a master at tip-toeing between the different genres, from humour to horror, all within the same story. The fact that he achieves it all with his highly engaging trademark minimalist dead-pan delivery adds to the mystique. 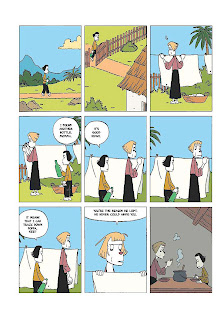 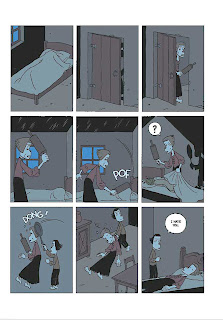 There's a nice interview with the creators on ComicBookResources (see here) where Jason drops in the hook (based on his first reading of the script) that it's Treasure Island directed by David Lynch.

Jim Woodring does funny things to my brain like no other graphic novelist. His surreal artistry splices the enchanting with the macabre to produce something whimsical as a folk tale but substantial as the oldest myth. Once again, Frank is our Alice in Wonderland through the latest book Congress of the Animals (Fantagraphics).

And if these two headliners weren't enough there's also Dave McKean's original graphic novel (maybe more 'graphic' than 'novel') Celluloid (Fantagraphics); a visual bullying on the subject of sex mixing mediums and techniques which continues to inspire. Also worth a look is Walt Disney's Mickey Mouse vol. 1 Death Valley (Fantagraphics) - although you may not find the two books racked next to each other. This material shows how far the Mouse has been smoothed over and diluted over the years to the point where no-one really knows what it contributes to fiction (in fact you wouldn't attribute the subtitle Death Valley to anything involving him nowadays). Back in the day Mickey Mouse had character and endured close calls and tight situations with the best of them and all at bullet-paced storytelling. 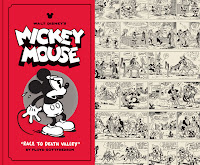 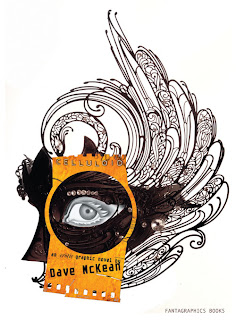 It would however be remiss of me not to mention a couple of non-Fantagraphics book out this week. We finally have the paperback edition of the visual treat Batwoman: Elegy (DC), Sweet Tooth vol. 3 and the comics adaptation of Mike Mignola's Baltimore (Dark Horse).

STOP! It's hammer time in the Marvel Universe of course and the Fear Itself tie-ins continue this week including Fear Itself: Fearsome Four #1 which gets Howard the Duck in on the action. Peter Parker sure is going down fighting in Ultimate Spider-Man #159 and Johnny Blaze gets a chance to move on but will he take it and who will he pass the mantle on to in Ghost Rider #0.1 (?). Flashpoint ripples are the order for DC including Emporer Aquaman and rather intriguingly Frankenstein and the Creatures of the Unknown #1 written by Jeff Lemire. And who could pass on some mighty Batman and Robin? Suddenly the DC universe seems slightly more urgent.

Don't look to the skies gentlemen; look to the features tab.
Posted by Daves Comics at 3:08 pm