This week in graphic novels: alternate universes, adventures in the wild wild west, and superheroes galore! Warren Ellis' critically acclaimed series PLANETARY arrives in beautiful deluxe edition, as well as the complete collection of Peter David's excellent run on X-FACTOR. All ages favourite STUFF OF LEGEND finally gets a second volume, good things come in threes with volume 3 of PREACHER, INDESTRUCTIBLE HULK and CROSSED, and my friends the YOUNG AVENGERS bust in with their second trade collection.
What are you looking forward to reading this week? Talk to us @DavesComics! 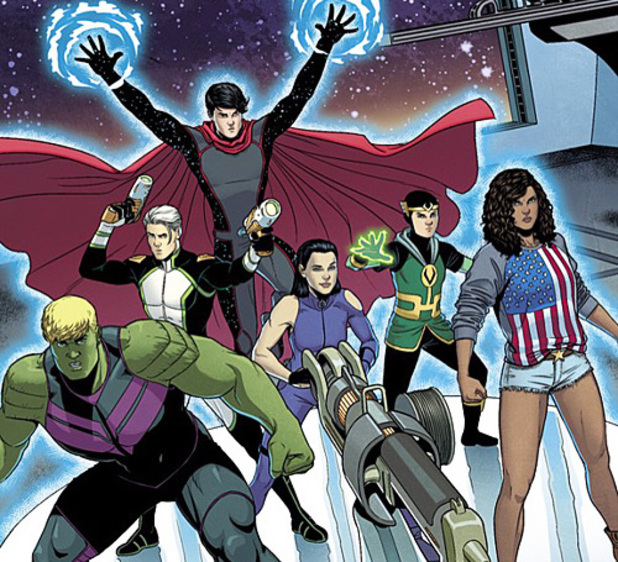 The kingdom of Naamaron is bitterly divided into warring factions, Purifiers and Modifiers, with both sides fearing the Great Vizier's deadliest assassin, Amala. With a price on her head-and a ghost monkey on her back-the future of both kingdoms may rest in her bloodstained hands! Collects the entire miniseries and Dark Horse Presents stories and includes a never-before-published Amala's Blade story, an art gallery, and creators' notes!
Debuted in the award-winning Dark Horse Presents.
Featuring art by Michael Dialynas from Superior Spider-Man Team-Up Special #1
"Swashbuckling fun for the whole family."-Comic Book Resources
ANIMAL MAN TP VOL 05 THE MEANING OF FLESH In these tales from ANIMAL MAN #27-37, Buddy Baker is desperate to reconnect with his family, but after he begins to explore the effects of his power to replicate the abilities of animals, will this former Super Hero ever be able to live a normal life?
BATWING TP VOL 03 ENEMY OF THE STATE (N52) Batwing has never been under more fire than in these stories from issues #13-18. First, David must fight one of the most crooked cop forces on the continent. Then, Batwing tries to take down the deadly Father Lost and the Sky Pirate, who put David's allies in danger.
BPRD HELL ON EARTH TP VOL 07 A COLD DAY IN HELL Following the deadly events of The Return of the Master, the zombie director of the Russian occult sciences division leads the B.P.R.D. to go head to head with demons from Hell. Meanwhile, Johann commands a rescue mission to locate the missing agents from The Abyss of Time. What they find is an army of mutated humans.
Collects B.P.R.D. Hell on Earth #105-109.
CROSSED WISH YOU WERE HERE TP VOL 03 In the dead of winter, fear is spreading through Gotham like a flu virus. Hundreds of residents have gone mad with fright, and dozens more are affected each day. Fortunately, Batman and his teenage partner, Batgirl, are on this medical case. And soon, the root of the problem is revealed. Scarecrow, the Dark Knight's most frightful foe, has taken over a dentist's chair, and is gassing patients with his evil fear toxin. If he isn't stopped soon, the entire city could be scared to death!
DC SUPER HEROES SUPERMAN YR TP DEADLY DREAM MACHINE
DC SUPER HEROES WONDER WOMAN YR TP DR PSYCHO CIRCUS
DC SUPER HEROES WONDER WOMAN YR TP FRUIT OF ALL EVIL
EERIE ARCHIVES HC VOL 15
ETERNAL WARRIOR TP VOL 01 SWORD OF THE WILD Soldier. Guardian. Warrior. Legend.
Across ten millennia and a thousand battlefields, Gilad Anni-Padda has traversed the darkest, most mysterious corners of history. But the horror and bloodshed of constant warfare has finally taken its toll on the man myth calls the Eternal Warrior...and he has abdicated his duties as the Fist and the Steel of Earth for a quiet life of seclusion. But when a blood vendetta from the distant past suddenly reappears in the modern day, he must decide if he will return to the ways of war...for the child who betrayed him thousands of years ago...
From New York Times best-selling writer Greg Pak (Planet Hulk) and superstar artists Trevor Hairsine (X-Men: Deadly Genesis) and Clayton Crain (Carnage), this volume collects the first four issues of the series that Comic Vine calls
"action-packed, well-written, and overflowing with potential."
INDESTRUCTIBLE HULK PREM HC VOL 03 SMASH TIME Working for a secret subdivision of S.H.I.E.L.D., Hulk is sent on his most dangerous mission yet! After the events of AGE OF ULTRON, history is breaking - and only the Hulk is strong enough to hold it together - but only with Bruce Banner's help! It's Hulk vs. the Chronarchists in the last hours before the extinction of the dinosaurs! Kid Colt, Two-Gun Kid, Rawhide Kid and the Black Knight guest star - but when the Chronarchists arrive in the time of Camelot, can the Hulk triumph against Merlin the magician? As Bruce Banner finds himself literally running out of time, the Hulk returns to the present - but which Hulk? Answers had better come fast, because the final showdown with the Chronarchists looms - and it's time to smash! Collecting INDESTRUCTIBLE HULK #11-15.
MARVEL UNIVERSE ULTIMATE SPIDER-MAN DIGEST TP VOL 05 It's all-out action and excitement as the hit Disney XD TV show bursts off the screen and into your hands with four screen-capture adaptations from season one, including an episode scripted by Marvel scribe supreme Brian Michael Bendis!
When Peter Parker discovers that Thor has been transformed into a Frog of Thunder, he must travel to Asgard to save the Nine Realms from Loki's wrath!
Spider-Man teams up with X-Man Wolverine to take down the mutant Mesmero, but things get freaky when Mesmero switches the two heroes' personalities!
Spidey's most dangerous foe, Venom, returns -and the sinister symbiote chooses Harry Osborn as its new host! An exhausted Spider-Man takes the weekend off, so of course that's when Dr. Octopus and the Whirlwind decide to strike!
PLANETARY OMNIBUS HC Hailed as a timeless story that turned modern super hero conventions on their heads, PLANETARY stars an inter-dimensional peace-keeping force including Elijah Snow, Jakita Wagner, and The Drummer. Tasked with tracking down evidence of super-human activity, these mystery archaeologists uncover unknown paranormal secrets and histories, such as a World War II supercomputer that can access other universes, a ghostly spirit of vengeance, and a lost island of dying monsters. Now, the entire series is collected in hardcover, including PLANETARY #1-27, PLANETARY/BATMAN #1, PLANETARY/JLA #1 and PLANETARY/AUTHORITY #1.
PREACHER TP BOOK 03 Collects PREACHER #27-33, SAINT OF KILLERS #1-4 and PREACHER SPECIAL: CASSIDY - BLOOD AND WHISKEY! During some down time, Jesse Custer faces an enemy from the past who seeks vengeance for his father's death. Also includes a story spotlighting the Saint of Killers and a stand-alone tale starring Cassidy, the vampire.
STUFF OF LEGEND OMNIBUS HC VOL 02 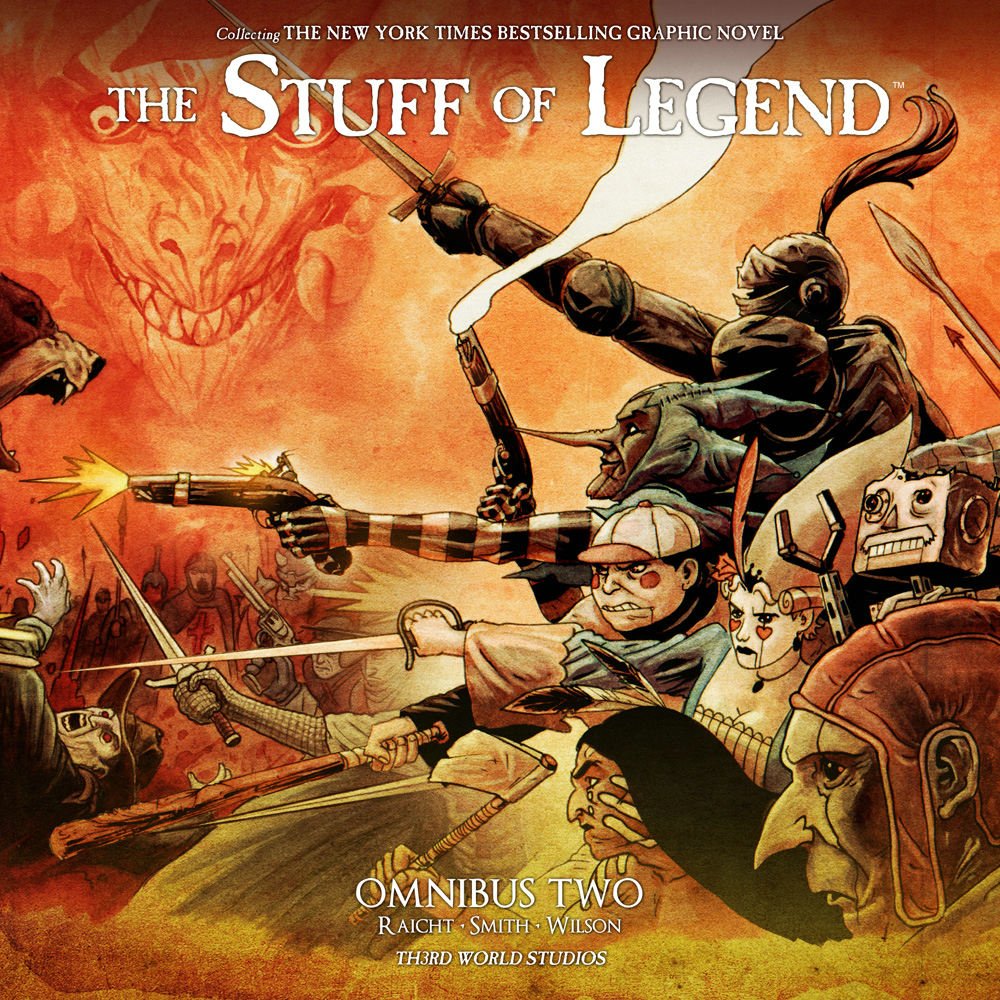 Collecting book 3 (A Jester's Tale) and 4 (The Toy Collector) of the New York Times bestselling series, The Stuff of Legend, this beautiful hardcover edition finds our toys at a crossroads. Unable to find their boy, our loyal toys' bonds have been tested and broken. Now scattered across The Dark, the toys must decide whether to continue their search or admit defeat and return home. Jester chooses to follow his heart in A Jester's Tale, and embarks on a solo quest to search for true love. Will he survive his swashbuckling journey across the perilous sea? Meanwhile in The Toy Collector, Maxwell the Bear, aching to bring the boy home, hunts for a weapon to defeat the Boogeyman for good. However, the Dark One does not play fair, and he is searching for an item as well,
one that may very well make him unbeatable.
X-FACTOR BY PETER DAVID TP VOL 01 COMPLETE COLLECTION Relive the gripping, noir-esque launch of Peter David's most memorable concept: X-Factor Investigations! Jamie Madrox sets up shop in the heart of Mutant Town - but with so many duplicates out in the world, who is the real Madrox? Does he even know anymore? Then, when the fallout from the HOUSE OF M depowers most of the world's mutants, X-Factor must find answers - fast! With Guido, Wolfsbane, Siryn, M and Rictor by his side - as well as the stuff-knowing Layla Miller - Madrox must take on the manipulative prescient Mr. Tryp's rival group Singularity Investigations, navigate a superhuman Civil War, learn why the X-Men lied to his team, deal with the unbalanced Quicksilver's new ability to reboot mutant powers for a price and discover the deadly traitor in X-Factor's midst!
Collecting MADROX #1-5 and X-FACTOR (2006) #1-12.
X-MEN TP VOL 01 ROAD TO ONSLAUGHT The X-Men have just averted the Age of Apocalypse, but the threat of Onslaught looms right around the corner - a villain so powerful he put the unstoppable Juggernaut into a coma! But before the X-Men can learn more about this shadowy foe, they must face Gene Nation, led by the vicious Marrow - and help Magneto's Acolytes battle Apocalypse's son, Holocaust, who escaped the AoA into the Marvel Universe! Plus: How will the world react when the Legacy virus' existence is made public? Can Rogue handle learning Gambit's greatest secret? And did Sabretooth's brain damage truly change his personality, or is he a time bomb waiting to go off? All this, and the Xavier Institute enrolls a new student! Collecting X-MEN PRIME, UNCANNY X-MEN (1963) #322-326, X-MEN (1991) #42-45 and ANNUAL '95, and X-MEN UNLIMITED (1993) #8.
YOUNG AVENGERS TP VOL 02 ALTERNATIVE CULTURE Existential horror turns cosmic horror as something emerges from the shadows of the past, and it seems the team have one more thing to worry about. The Young Avengers race desperately across the multiverse in pursuit of their missing friend, but their road trip goes crazy as it reaches its destination. Because its destination is mainly excitement and heartbreak. Several Young Avengers decide what to do next - the question is, whether they decide to stay Young Avengers! Plus: Ever wonder what the super-hero equivalent of a terrible soul-sucking talent-wasting temp job is? Wonder what Tommy (a.k.a. Speed) has been up to? Wonder why mutant David Alleyne (a.k.a. Prodigy) hasn't been even in the background in any one of the eight thousand X-books? Discover answers herein! And hey, are you ready for Mother's Day? Collecting YOUNG AVENGERS (2013) #6-10.
Posted by Daves Comics at 10:00 am