Weekly Treats! Love From The Shadows & The Bulletproof Coffin

In the fairly divisive medium of comics no-one divides quite so much as Gilbert Hernendez in that initial flick-through. For every glowing review ("I don’t think there’s ever been a greater cartooning talent in terms of what he brings the serial comic book form." Tom Spurgeon - The Comics Reporter) you'll find someone ready to wrinkle up their nose and I've heard people in the shop say that they don't think he can draw (followed by the sound of me hitting the floor as I pass out). It doesn't help that on first glance the reader may think that they've stumbled into a Russ Meyer movie. 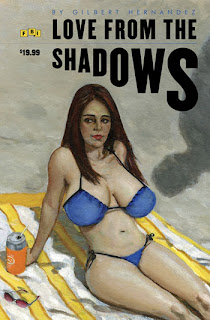 The not-for-reading-on-the-bus cover is painted by Steven Martinez who painted the portrait of Marsellus Wallace’s wife Mia in the movie Pulp Fiction.

For me though, what may seem gratuitous to some speaks of hot blooded will; the passionate journey. Hernandez has said that within the so-called genre of exploitation he can better explore themes of identity and madness. Emotions run deep in his characters and by bouncing around through continuity, everyone gets a chance to breathe and/or breakdown.

Love From The Shadows (Fantagraphics) is the final release in a B Movie trilogy series (that includes Chance In Hell and The Troublemakers, which I reviewed here) that Fritz - one the characters from his ongoing L&R series - starred in when she was an actress. What does that extra piece of complication mean? Well if you're a first time reader you'll get a loving homage to the B Movie complete with a complex plot, raging melodrama and sex & violence; a movie by the aforementioned Russ Meyer perhaps. If you're a regular then you'll know about Fritz's deeply troubled personality which provides an added layer of depth to the role she is playing and in turn communicates more about her character. Maybe, amongst his regular head-stirring psychological autopsies, Hernandez has found a way to reflect the modern obsession with X-Factor-style celebrity where a performer rarely gets to step out of the spotlight and their work is barely divorced from their private life.

There's an detailed review at TheComicsJournal (see here) and an excellent interview with the man himself at ComicBookResources (see here).

The Bulletproof Coffin (part of Image's commendable new look) is so cool you can read the first issue on practically any page you visit on the net (ComicsAlliance have it here). It blurs comic history with the reality it's created for itself maybe as a companion piece to something like Warren Ellis' Planetary. All very post-modern you may say, but this also has a nice punk edge to it to challenge any accusation of being high-brow. It's like a semi-serious Michael Kupperman with a sustained narrative and deserves to be something of a contemporary classic. 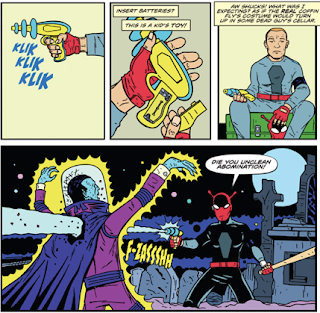 Invincible volume 14 (Image - old look) also makes an appearance for its deservedly growing number of readers and as for the floppies (comics, not readers) we have the rather essential FF #2; Mighty Thor #1 drawn by Oliver Coppiel who's looking like the defining modern era Thor artist; the excellent Xombi #2; and a for-heaven-sake-don't-miss-it-because-it-don't-come-out-that-often appearance of Rasl #10 and the Hate Annual #9. Finally, there's Action Comics #900 (that's 900!) which has got to be worth a toast - maybe slip it in when you're raising a glass to the Royal Wedding. Pip-pip.