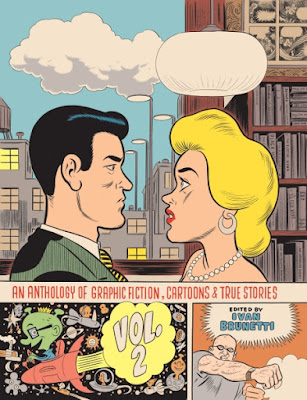 Just wanted to drawn your attention to a great end of year opportunity.  Ivan Brunetti may be known to many as author of the wonderfully transgressional comedy titles such as Misery Loves Comedy, but behind that there's a quietly spoken, well-read and thoughtful commentator on comics (its worth reading his book Cartooning: Philosophy and Practice).  Which brings me to the two book series An Anthology of Graphic Fiction, Cartoons and True Stories (Yale University Press) collecting a comprehensive who's-who of the best in contemporary illustration carefully selected by Brunetti.  These hard-cover books are wonderful reference points showcasing artists who have pushed at the conventions of the medium.

Released in 2008, the reason I'm drawing it to your attention is that we have a limited supply of volume two retailing for only £7.50 (usually £17).

Good grief, what a book this is – a hyperactive, periodically insane dive into the archaeology of alternative comics; the sort of book you long to present to people with no interest in the medium and watch as it removes the top of their heads and gives their brains a good stir. More or less everything is here, from Winsor McCay's "Little Nemo" strips, begun in 1905, to the work of Charles Burns, Art Spiegelman, Chester Hines... you name it. Each page has something new, upsetting, wonderful on it,which makes it, along with the equally gigantic vol. 1, pretty much unbeatable.
The Independent (see here)

Here Brunetti picks up with further examples of many of the creators he focuses on in his first volume, as well as introducing some lesser-known artists and a range of archival material from the early days of Sunday comics. There is no clear logic to the way the comics are ordered here, but instead Brunetti lets the selection and the order take shape organically, based, as he puts it, on the same kind of creative intuition he would bring to the creation of one of his own comics. And the result is truly something special. So many of our favorites were here, and in almost every case Brunetti honed in on just the right selection not just to represent that given creator’s work, but to speak to the other selections in this volume. In its own terms it work wonderfully—arguably even surpassing Ware’s McSweeney volume as the best anthology of its kind.
Guttergeek.com (see here)


I leave the last word to Ivan Brunetti himself. 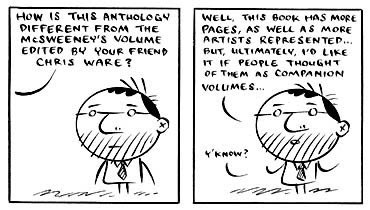 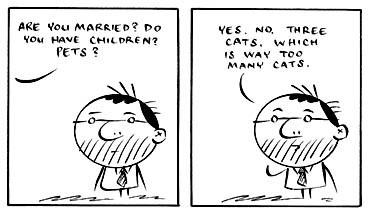 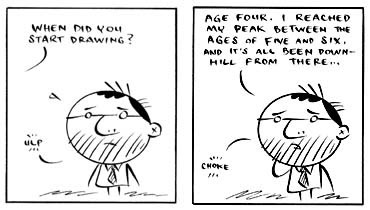