On Issue # 61
Triangles
Pyramids and Diamonds.
Phoenix hangs within the blinding light of her signature form.
From the tips of her fingers to her toes an inverted triangle
invisibly floats.
From the tips of her fingers to the point in the middle of the 'M'
Another invisible triangle hangs.
Pyramid points at the top of her boots
The Diamond that makes her feet,and another at ankle to knee
then another at knee to waist and another from waist to tip of light upon her forehead.
2 for the palms of her hands and 2 tiny diamonds for eyes.

Below her in the foreground with his back turned to us
a man made of triangles steps back almost out of the composition to be
with us, where its safe.
His head is the tip of a Triangle that begins at his finger tips
or a diamond that meets between his legs.
A silhouette against the base of the white flames.
A coven of X-Men
petrified by the witch who not only survives the flame
but embraces it.

The light is terrifying-
the covers are now lit!
From this point on the truly terrible
cast inky shadows
that puff and cloud
and stain. 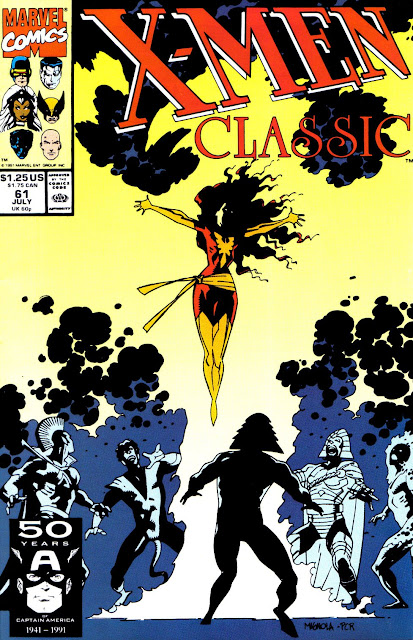 On Issue #62
Another witch appears with light a'leaping from her body.
Figures fall and leap but with no ground to land upon.
This is a land of malevolent light and poison shadow.
The ink soaked X-MEN are being dragged from the page back
to the ink well.
Limbs flail off page, only Rogue has 2 hands to conjure the jagged light.
If you trace around the exterior of the X-MEN and include
where their hands would be another Diamond is evident and within that Diamond?

Another Diamond like a flame, made by the negative space caught
at its bottom tip by the meeting of Wolverine and Nightcrawlers
legs and its peak where Storms left sleeve meets the top of the C in Classic.

Between Rogues legs the most perfect blue triangle
&
there in the foreground
perched in a circle
and flanked by a rectangle
the creators signatures. 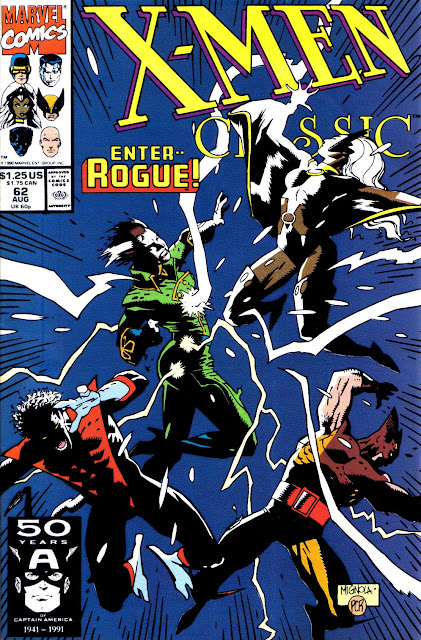