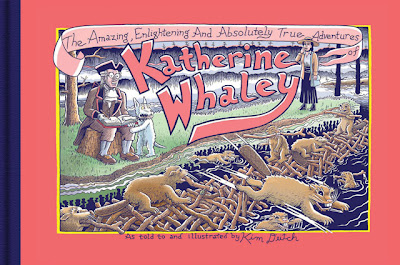 This is a story about a girl, born at the beginning of the 20th century. She grows up in a small river town in upstate New York. One day the mysterious Charles Varnay, an eccentric who dresses in the style of an 18th century dandy, comes to town, his sole companion a remarkably intelligent dog named Rousseau. Varnay wants to star Katherine in a movie serial he plans to make, called The Goddess of Enlightenment.
Katherine is rather put off when she discovers that he expects her to appear nude in this film. But even more strange is the film’s subject matter: It has to do with seven metal urns that Varnay claims are actual recordings of the voice of Jesus Christ which, he says, contain an urgent message that the modern world needs to hear!
Varnay also claims that his dog, Rousseau, is the product of experiments he has been making in advanced selective breeding. He’s eager to continue these experiments with human subjects; Katherine realizes that he’s expecting her to be a part of this, and it worries her...
The Amazing, Enlightening and Absolutely True Adventures of Katherine Whaley is a full-length graphic novel created in a striking "widescreen" landscape format that allows Deitch to give full rein to his astonishing graphics.
Hardcover/176 pages/Fantagraphics
IN STOCK

Kim Deitch has a reserved place at the first table of underground cartoonists. The son of UPA and Terrytoons animator Gene Deitch, Kim was born in 1944 and grew up around the animation business. He began doing comic strips for the East Village Other in 1967, introducing two of his more famous characters, Waldo the Cat and Uncle Ed, the India Rubber Man. In 1969 he succeeded Vaughn Bodé as editor of Gothic Blimp Works, the Other’s underground comics tabloid. “The Mishkin Saga” was named one of the Top 30 best English-language comics of the 20th Century by The Comics Journal, and the first issue of The Stuff of Dreams received the Eisner Award for Best Single Issue in 2003. Deitch remains a true cartoonists’ cartoonist, adored by his peers as much as anyone in the history of the medium.
Posted by Daves Comics at 10:00 am