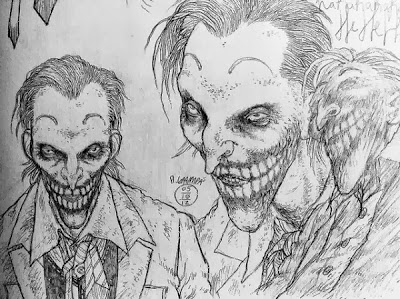 While the 3D Cover Extravaganza may be over there are still plenty of exciting titles arriving this week to come in store for - the Infinity Event continues to rampage across the Marvel Universe, Image begin a brand new vampire saga in Feudal Japan, and Jonathan Hickman's new series about wrathful gods seeking vengeance against humanity explodes into action!

JONATHAN HICKMAN brings the wrath of the gods to comics with his new series, God is Dead!  Modern man turns all his technology and destruction to bear against the deities of old.  But what good are guns, tanks, and even nuclear missiles against the power of the divine?  In their hubris, humans have ruled for too long.  Now the gods of legend rule and to disobey them is death.  But something is brewing just below the surface of the newly returned powers...  A war of the gods themselves!

The Empire is poised for an attack on the peaceful world of Aquilae, and only Jedi General Luke Skywalker seems concerned. When King Kayos is killed, Jedi in training Annikin Starkiller is ordered to find Princess Leia, while Skywalker sends his only squadron against the Empire's powerful new battle station!

The villains have taken over the world! The Teen Titans fight back! Can the inexperienced teen heroes do what the adults could not? (Answer: Nope. It goes very poorly.)


HE MAN AND THE MASTERS OF THE UNIVERSE #6

"Men go and come, but Earth abides."- Ecclesiastes 1:4
Decades after "The Blight" all but wiped out the human race, Mother Nature is taking back what's hers, and she's not alone...The Hinterkind have returned.
From the last, lost corners of the world they come, a myriad menagerie of myth and magic...but these aren't childhood fairytale creatures. They are flesh, blood and passion, and they have a long-simmering hatred for those who drove them into the shadows:
The human race!
After her grandfather disappears, Prosper Monday must leave the security and seclusion of their Central Park village to venture into the wilds to find him, unaware of how much the world has changed. Or how hungry it has become...


TRINITY OF SIN THE PHANTOM STRANGER #12

VAMPIRES IN FEUDAL JAPAN!
Kichiro is an outsider in feudal Japan. Lacking the Japanese blood that would allow him to become a samurai, Kichiro must fulfill his dreams of serving the shogun in a less traditional manner... by eliminating every foreign supernatural threat that rears its fangs!


HENRY AND GLENN FOREVER AND EVER #2

• When a top-secret orbital research station is dragged from the sky by an unknown alien force, army-of-one Steve Rogers finds himself caught between two global superpowers on the brink of war!
•  But how does it involve Volkov - a decorated Russian officer he last crossed paths with during the closing days of World War II, who disappeared on an ill-fated lunar mission over forty years ago?
•  Andy Diggle and Adi Granov send living legend Captain America on a one-man mission into the heart of darkness-in search of another!

• Thanos' forces have attacked the Earth, but what part of his plan involves the super youth of the world?
•  See the attacks on the Avengers Academy, Jean Grey School, Future Foundation, Braddock Academy, Wakandan School of Alternative Studies, the Pan-Asian School for the Unusually Gifted and the Latverian School of Sciences!
•  The students at all of the world's super schools try to put into play everything they've learned as they fight side-by-side with their super teachers!

• From the haunted heights of a mysterious castle to the dizzying depths of the deep seas, the Amazing Spider-Man has to take on not one, not six, not twelve - but ninety-nine of the Marvel Universe's deadliest villains to save the lives of countless innocents!
•  Matt Kindt (Mind MGMT) and Marco Rudy (Swamp Thing) bring you a defining hour in the life of the webbed wonder in a race against time and a battle against evil.

• Earth's Mightiest Heroes, the AVENGERS explode onto the scene with a new series and an all-new team member!
•  To save his own life, the RED SKULL must transfer his mind to a more fit body! And he has chosen the body of ... CAPTAIN AMERICA!
•  Based on the hit animated series, now airing on DISNEY XD!
•  Extra-sized issue with bonus LEGO comics featuring Marvel's greatest heroes!

INFINITY TIE-IN! new ongoing series !
•  Proxima Midnight is killing New York City one block at a time...
•  Luke Cage's ad-hoc Avengers might not be able to stop her...
•  And the one hero who can is at the bottom of the Mariana Trench.
•  Think it can't get worse? It can always get worse.

• The unthinkable happens when the Punisher surrenders himself to police!
•  The trial of the century begins as Frank Castle admits to murdering a district attorney!
•  Is this the end of the Punisher's war on crime?
SAVAGE WOLVERINE #9