So many new series arriving this week, where to begin! How about with a truly unexpected Halloween treat, Afterlife with Archie - the buzz surrounding this series has been amazing, who would have thought Archie could lend itself  to horror? It's a match made in Hell, apparently.  ;-) Speaking of horror, new Vertigo series Coffin Hill looks like it could be another winner for the revitalized DC imprint, and of course the big news of the week belongs to zombilicious The Walking Dead - the 10th anniversary special edition of issue #1 you've all been anxiously waiting for is finally here, along with plenty of variant covers for #115, and a spotlight issue for prominent tv character Tyreese! 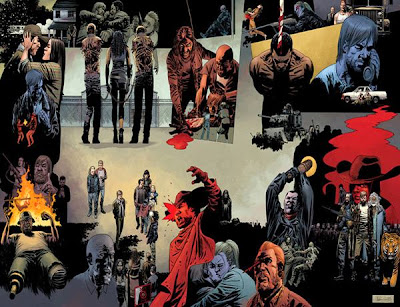 I've been eagerly anticipating the release of Kieron Gillen's new Ancient Greek epic Three, told from a very different perspective of the Spartans than Frank Miller's 300, and Rocket Girl, which looks to be a beautifully illustrated and fun science fiction mystery series. There's also a double sized issue of Batman and new Forever Evil, lots of action over at Marvel with the Infinity event and its many crossovers, the finale of America's Got Powers, and the next issue of all-ages favourite Hero Bear and the Kid.  What are you excited to read this week? Talk to us on Twitter @DavesComics!

NEW ONGOING SERIES! "Escape From Riverdale" -- This is how the end of the world begins... Harvey Award-winning writer Roberto Aguirre-Sacasa (Carrie, Archie meets Glee) and Eisner-winning artist Francesco Francavilla (Batman, Black Beetle) take Archie and the gang where they've never been before-to the grave and back! A horrific accident sets off a series of grim events and Sabrina the Teenage Witch must try to repair the unspeakable evil her spell has unleashed. Gasp in horror as Riverdale faces an impending zombie Arch-pocalypse in this brand-new, spine-tingling ongoing series -- but be warned, kiddies, this one's not for the faint of heart! For TEEN+ readers.

The Shaolin Cowboy returns, but nowhere in sight is there a dead Robin, any infinity gauntlets, or a single conquering Ultron-just flat-out action, intrigue, and plenty of roadkill. Geof Darrow's slow-talkin', kung-fu-gripping hero proves once again, in this brand-new new series, that the only thing that can stop a bad guy with a gun is a good guy with a chainsaw!

Zero Year Part Four! In this amazing, double-sized issue, Batman is on the trail of the Red Hood Gang and their mysterious leader, secret origins are revealed, and a major surprise will change the course of Zero Year and Batman's life!
BATMAN ARKHAM UNHINGED #19
BATMAN LIL GOTHAM #7
COFFIN HILL #1

COFFIN HILL stars Eve Coffin, a rebellious, teenage lowlife from a high-society family with a curse that goes back to the Salem Witch trials. Following a night of sex, drugs and witchcraft in the woods, Eve wakes up naked, covered in blood and unable to remember how she got there. One friend is missing, one is in a mental ward-and one knows that Eve is responsible.  After a stint as a Boston cop that ends in a bullet wound and unintended celebrity, Eve returns to Coffin Hill, only to discover the darkness that she unleashed ten years ago in the woods was never contained. It continues to seep through the town, cursing the soul of this sleepy Massachusetts hollow, spilling secrets and enacting its revenge.
Set against the haunted backdrop of New England, COFFIN HILL explores what people will do for power and retribution. Noted novelist Caitlin Kittredge, author of the Black London series, brings a smart, mesmerizing style to comics. Artist Inaki Miranda (FABLES) brings his dynamic storytelling to COFFIN HILL, following an acclaimed run on FAIREST.
CONSTANTINE #7
FBP FEDERAL BUREAU OF PHYSICS #4 (MR)
FOREVER EVIL ARKHAM WAR #1 (OF 6)

As FOREVER EVIL hits the world, no corner of the DC Universe is in worse shape than Gotham City! Madness and mayhem hit the streets as both Arkham Asylum and Blackgate Prison unleash their prisoners upon the helpless citizens of Gotham. And with no Dark Knight to protect the city, what horrors will follow?

Three jaded fetish models are unexpectedly thrown into a violent world and made to confront a horrible and unperceived truth: Hidden among us are entities that feed on the very thing we hold most sacred, our memories. No longer content with their lives as hunted cattle, they become the hunters.
POPEYE CLASSICS ONGOING #15
SONS OF ANARCHY #2 (OF 6) (MR)
THREE #1

When a member of the Spartan ruling class visits an isolated homestead of Helot workers, a brutal massacre is only the beginning. KIERON GILLEN (PHONOGRAM, Über, Iron Man), RYAN KELLY (Saucer County, Local) and JORDIE BELLAIRE (THE MANHATTAN PROJECTS, NOWHERE MEN) unite to tell the heroic story of three slaves and their desperate attempt to escape 300 of the finest warriors who've ever lived.
TRANSFORMERS ROBOTS IN DISGUISE #21
TRIPLE HELIX #1 (OF 4)

Where TRIO stopped, HELIX starts! There's a MONSTER on the loose in the City... but will the mysterious CHANGELINGS of TRIPLE HELIX destroy it before they realize it's really an old FRIEND?

The organ smuggler Sexica and her werewolf boyfriend Nikoli try to get by in a harsh Soviet fantasy world with dream monsters, radiation slugs, and starships falling from Wolf War 3.
Reprints 2007's "The Fall," the original 2003 adult Warheads story, and the 2004 short "Elevator."
ROCKET GIRL #1

A teenage cop from a high-tech future is sent back in time to 1986 New York City.  Dayoung Johansson is investigating the Quintum Mechanics megacorporation for crimes against time.  As she pieces together the clues, she discovers the "future" she calls home - an alternate reality version of 2013 - shouldn't exist at all!
Blast off with the new ongoing series by BRANDON MONTCLARE (Halloween Eve) and Eisner Award nominee AMY REEDER (Batwoman, Madame Xanadu).

Just in time for the premiere of Season Four of the TV show!  Tyreese, a character prominently featured in the season, gets a spotlight here.  The special issue reprints his first appearance from THE WALKING DEAD #7 as well as a new origin story, first printed in THE WALKING DEAD: FREE COMIC BOOK DAY SPECIAL.

For generations, the elves sought a safe haven against all who would do them harm. But the dream that Chief Cutter and his Wolfriders fought and died for may be the very thing destroying them. The skills that helped them survive the harsh world are fading, and the growing threat of a tyrant obsessed with exterminating all elves makes for a disastrous brew that must surely boil over.
GFT OZ #3 (OF 6) A CVR LASHLEY
HEROBEAR & THE KID INHERITANCE #3 (OF 5)
RACHEL RISING #20

Join the INCREDIBLE HULK, and his larger-than-life teammates as they tackle threats that are too  enormous for other heroes to handle in this all-new series!
Based on the upcoming animated series on DISNEY XD by the Emmy Award-winning Paul Dini ("Batman: The Animated Series") and Henry Gilroy ("Star Wars: The Clone Wars")

You watched Stan "The Man" Lee pitch it on Season II of AMC TV's "Comic Book Men"; Now, from CBM cast members Walt Flanagan & Bryan Johnson comes "Cryptozoic Man". Alan Ostman, a middle-aged husband/father, sees his life quickly unravel when his daughter goes missing on a camping trip in the Pacific Northwest...Bigfoot country. After Gray aliens abduct him from a roadside bar, he learns that the fate of the world is dependent on trapping the world's most legendary cryptids...not to mention defeating a psychopath in a pig-shaped leather bondage mask, Alan knows he has his work cut out for him. The storyline revolving around this four issue series will be revisited in Comic Book Men Season III.