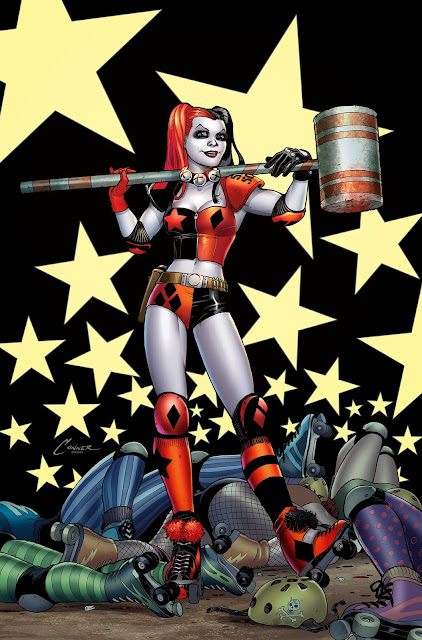 I think we all know what the biggest release this week is - it's Harley Quinn of course! She might be a major part of the Suicide Squad, but now she's starring in her own fourth-wall-breaking, multi-artist extravaganza of a comic in a new ongoing series.  Also on the shelves for your reading pleasure: local favourites God is Dead, The Wake,  Young Avengers (wasn't last month's issue shocking? I can't wait to read #12!), and Sex Criminals,  and after a brief, but much noticed absence Uber returns with issue #7.  Forever Evil and Zero Year crossovers continue over at DC, while at Marvel the Cataclysm event heats up with Ultimates, just as Infinity nears its epic conclusion.
What are you looking forward to reading this week? :)

NEW ONGOING SERIES! The end of the world is here... The horror continues as a zombified Jughead goes on a relentless hunt for brains in this shocking new series by Harvey Award-winning comic/screenwriter Roberto Aguirre-Sacasa (Stephen King's Carrie, Archie meets Glee) and Eisner-winning artist Francesco Francavilla (Batman, Black Beetle). When he performs a despicable and frightening act in front of everyone at the Halloween dance, tensions start to rise and fears begin to mount-who will be next to join Jughead in the Afterlife? And what about those who are already infected? Be warned, kiddies, this one's not for the faint of heart!  For TEEN+ readers.
ARCHIE & FRIENDS DOUBLE DOUBLE DIGEST #33
JUGHEAD'S DOUBLE DIGEST #197
MEGA MAN #31

It is god-mageddon as the pantheons clash for ultimate rule.  Gods from every faith are locked in mortal combat with the Earth as the spoils.  JONATHAN HICKMAN brings the wrath of the divine to comics in God is Dead!  A small group of human resistance fighters undertake a covert mission to recover the DNA of a fallen deity.  But can human kind, in all their arrogance, find a way to create their own secret weapon against these all powerful foes?  The doomsday clock is ticking and with each moment we are moving closer
to annihilation.
NIGHT O/T LIVING DEAD AFTERMATH #12
STITCHED #17
UBER #7

KIERON GILLEN's Uber has taken the comics world by storm.  The war in the Pacific has changed.  With the deployment of Ubers into the naval combat, suddenly the balance of power is shifting.  The Japanese super soldiers have a specific goal and supported by their Kamikaze pilots, they are succeeding in devastating the Allied fleet.  As the Allies race to catch up to their enemies' development of Ubers, they must find a way to stem the tide of destruction raining down upon them.

Finn and Jake find themselves in a sticky situation when Princess Bubblegum's experiments searching for the origin of life...specifically, her life...go horribly wrong, overcoming the Candy Kingdom! What sour weapon can the boys find that can overcome something so
primordially sweet?
BRAVEST WARRIORS #14
HELLRAISER DARK WATCH #10
MY LITTLE PONY FRIENDSHIP IS MAGIC #13
REGULAR SHOW #6

The fearsome Rakata have invaded the Tython system, and war rages on every world. With Forcesabers in hand, the Je'daii have aligned themselves with unlikely generals: Daegen Lok, the mad Je'daii, and the stranger, the Force Hound Xesh-one the devil they know, the other the wild card they don't!
STRAIN THE FALL #5

Are the Caped Crusader and the Boy Wonder asleep on the job? No, they are under the spell of that sinister somnambulist, the Sandman. (No, not THAT one!) Is it bedtime for all of Gotham City? Will the Dynamic Duo wake up in time to put out his lights? Don't miss this issue's story illustrated by 2013 Eisner Award-winner Colleen Coover!
BATMAN AND TWO FACE #25
BATMAN BEYOND UNIVERSE #4
BATWOMAN #25
BIRDS OF PREY #25 (ZERO YEAR)
FABLES #135

A new era is beginning for the Farm as knights begin to arrive from every corner of countless worlds. In the old version of Camelot, the brief shining moment was destroyed by infidelity, infighting and the evil machinations of the king's sister. If Rose Red is the king this time, does that mean Snow White is the one destined to bring it all crashing down around them?
FOREVER EVIL ROGUES REBELLION #2 (OF 6)
GREEN LANTERN NEW GUARDIANS #25
HARLEY QUINN #0

This bombastic debut issue features art by award-winning illustrators including Darwyn Cooke, Sam Kieth, Tony S. Daniel, Paul Pope, Walter Simonson, Art Baltazar and others-but will any of them measure up to the exacting standards of the Clown Princess of Crime? Don't miss the thrilling return of Harley Quinn in her own monthly series!
HE MAN AND THE MASTERS OF THE UNIVERSE #8
RED HOOD AND THE OUTLAWS #25 (ZERO YEAR)
SCOOBY DOO TEAM UP #1

Rumors of a giant bat-creature bring Scooby and the gang on the run - but Batman and Robin are already on the trail of their old foe, the monstrous Man-Bat. Before long, the crooks behind a fake bat-creature will come face-to-face with the real thing... with the good guys caught in the middle! Don't miss the start of this new, bimonthly series!
SUPERGIRL #25
TRINITY OF SIN PANDORA #5
WAKE #5 (OF 10)

There have been hints that Lee Archer's struggle at the bottom of the ocean will have much, much bigger ramifications. A flooded future...an impact on evolution...and more.
Now, we finally find out.  If you think you know what THE WAKE is about,
this issue changes everything.
WONDER WOMAN #25

Finally, the origin of Lt. Starbuck is told by #1 New York Times best-selling author Tony Lee! See how Starbuck became a Viper pilot, his first meeting with Apollo and why Adama treats him like a son - as he pieces together what really happened the night he was orphaned, and the name of the traitor who ordered it...
DEJAH THORIS & GREEN MEN OF MARS #8 (OF 12)
GRIMM #7
JENNIFER BLOOD #33
RED SONJA #5
SHADOW #19

Who knew vacation could be this exciting? Ben Tennyson and his teammates kick off a maelstrom of action when an ocean cruise brings Ben in the cross hairs of Ssserpent, who's out to find a long-lost underwater society. But does Ben's new, slightly oddball love interest harboUr dark secrets of her own? Aliens, superpowers, ships and swimsuits: the perfect ingredients for high-seas adventure.
SAMURAI JACK #2
TRANSFORMERS MORE THAN MEETS EYE #23 DARK CYBERTRON

How did these two end up in that bank, with those guns? Because they seemed like such nice kids, right? Well, THE SEX POLICE have the same questions and descend on Susie and Jon. And we get the rest of Jon's gory story - if you read ONE weird sex and time comedy comic this year, make sure it's "My Sexual Errors 1998 - Present!"
SHELTERED #5
TODD THE UGLIEST KID ON EARTH #7
ZERO #3

INDIE
A VOICE IN THE DARK #1

It's been 72 days since Zoey killed someone. With her recent move to college, Zoey is eager to start a fresh chapter of her life - one where she can control her dark urges they way she has before. But when she becomes the host of a late night campus radio show, Zoey must consider if she has given a voice to something far more troubled than her anonymous callers.
ATOMIC ROBO SAVAGE SWORD OF DR DINOSAUR #3 (OF 5)
ETERNAL WARRIOR #3
IMAGINE AGENTS #2 (OF 4)

YOU MAY HAVE FORGOTTEN ABOUT THEM.
BUT YOUR IMAGINARY FRIEND HASN'T FORGOT ABOUT YOU.
Terry and Dave must gather their wits and uncover the mystery behind Dapple's evil plan. With the help of the toy-lovable gelatin-Blounder, they may just have a chance to crack the case. Unbeknownst to them, the kidnapping of Furdlegurr has put 6-Elliot Fairview
onto Dapple's trail.
LEGEND OF OZ THE WICKED WEST ONGOING #13
MYSTERIOUS STRANGERS #6
RACHEL RISING #21
SIMPSONS WINTER WINGDING #8
WASTELAND #50
X-O MANOWAR #19

NICK FURY has defied the odds all his life and is no stranger to extinction level events.
It's time to save the world again...at any cost!
DAREDEVIL #33
DEXTER #5 (OF 5)
FANTASTIC FOUR #14
INDESTRUCTIBLE HULK #15
LONGSHOT SAVES MARVEL UNIVERSE #2 (OF 4)

When someone is targeting the lucky for death, it won't take long before the luckiest X-Man, Longshot, is in the killer's sights. But things quickly go from bad to worse as super heroes, villains, all of S.H.I.E.L.D. and even COSMIC ENTITIES have it out for our boy!
Is Longshot finally in over his head, or can he beat the odds and save the
Marvel Universe when no one else can?
SECRET AVENGERS #11 INF
SUPERIOR SPIDER-MAN ANNUAL #1

This ain't no regular Annual, buck-o! This one counts!
BLACKOUT is back, and he wants to re-establish his reputation by killing the toughest guy in town... Spider-Man! He plans to force Peter Parker Spidey into a trap. Blackout's leverage? Aunt May! The world will never look at Superior Spider-Man the same after this. BE THERE!
SUPERIOR SPIDER-MAN TEAM UP #6 NOW
THUNDERBOLTS #18 INF
UNCANNY X-MEN #14
WOLVERINE MAX #13
X-MEN #7
X-MEN LEGACY #20
YOUNG AVENGERS #12

The Young Avengers versus "The Young Avengers". The stakes? What have you got?
Loki's scheme reaches its final twist. Expect the team's jaws to just hit the floor and lie there, twitching for the rest of the comic. A tempting offer for Noh-Varr may get an arrow through his head. Other romance based drama too, as kissing is the new planetary extinction event.