The Wolf Of Baghdad 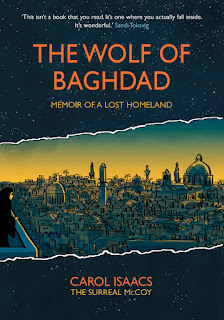 Carol Isaacs is a musician and illustrator who, under the name The Surreal McCoy, has contributed to The New Yorker, The Spectator and Private Eye. Although she was born and raised in England, her family originated from Iraq but fled during the pogrom in the 1940’s. In a few years almost the entire population of 150,000 Jews had either perished or fled the city of Baghdad. The Wolf Of Baghdad (Myriad) is a graphic memoir in which Isaacs, as the central character, dreams about life in the era.

In the opening, musical notes drift through the London sky until we find the author in her living room looking troubled. She retrieves a box of photographs which then litter the page as the musical notes did – a lovely touch to convey a sense that they are having the same influence on her as the music does.

The pages of wordless story then start to become punctuated with drawings of photos of faces accompanied by quotes about life in the old days. As the protagonist lays on the sofa and drifts off to sleep, she is led on journey back to Baghdad where she watches ghostly forms enjoy a life of peaceful integration and cultural cohesion. While the pages of sequential art are wordless, the pages of real-life quotes illuminate and compliment the images. Then, feeling as if it was down to nothing more than a random change in public opinion, we see the rise in Nazi propaganda and the attitude towards the Jewish community turns against them. 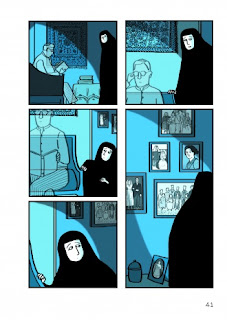 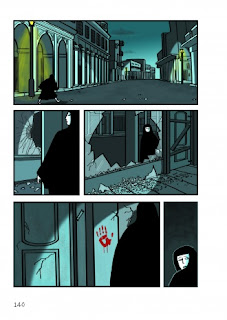 There is a lot to cover in the book – to convey the life before the pogrom so that the reader can appreciate the loss, but also keeping it brief to maintain the dreamlike quality – and Isaacs manages the pacing really well. The personal testaments ground the work amongst the figures of the past who, unnervingly are depicted as ghosts so that the spectre of death lingers throughout the book. The linework is simple with a naïve style that brings to mind Marjane Satrapi’s Persepolis except warmer and less abstract. The artwork is also coloured nicely, starting with a greyscale in the opening pages and then, like the movie Wizard of Oz, becomes coloured as we discover the new world. As events turn for the worse, the pages around the panels become black and the images are washed in watery blues.

The title of the graphic novel comes from the belief amongst Baghdad Jews the wolf kept away spirits and demons – Isaacs does not overplay the sickening irony that it turned out to be real people that were capable of inflicting true horror.

Carol Isaacs has been touring with a live show of The Wolf of Baghdad involving a live band and projections from the book - details can be found on her blog.