Pass Me By: Gone Fishin' 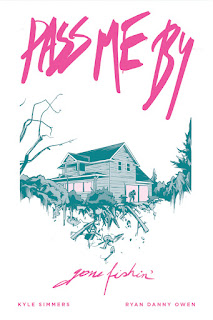 On first glance, Pass Me By Book One: Gone Fishin’ (Renegade Arts Entertainment) appears to be a quietly affecting account of an old guy in a small northern Canadian town coming to terms with the early stages of dementia. Ed goes fishing with his lifelong friend – which we know through flashbacks and their shared recollections – hangs out in diners, talks about his daughter, struggles with shopping and remembering where he parked his car, and almost gets into a fight in a bar when he becomes confused during a game of pool.

There’s no dramatic resolution to the story, because there doesn’t really seem to be a dramatic narrative drive to resolve. But there is more going on here. This is only book one in a planned five book series and the blurb on the back of the book describes it as a coming of age story about understanding queer identity; this, despite there being no mention of homosexuality in the story except for when Ed loses his temper with a Sheriff who has been waffling on, just at the moment when he makes a disparaging passing comment about a gay couple. There are also hints of something more within the panels: a lipstick falls out of Ed’s old biker jacket; there are marks on the wall of missing framed photos amongst the ones of his wife and daughter and fishing with his friend; and the kitchen table is littered with notes which look like messages of love. 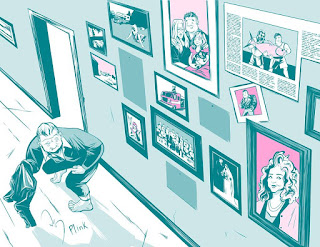 Pass Me By has been brought about through Kickstarter funding. Illustrated by Kyle Simmers and co-written by Simmers and Ryan Danny Owen, the pace is slow and measured, focusing on detail, like the drawing on a cigarette and a character retelling a seemingly unimportant piece of gossip. The style is ever-so-slightly cartoony – the characters have little white circles for eyes – and nicely expressive, and coloured with different shades of two colours; pink and turquoise, with the pink acting a signifying colour, drawing attention to items and potential themes.

A book that feels very much like its protagonist, surrounded with an air of mystery and depth. 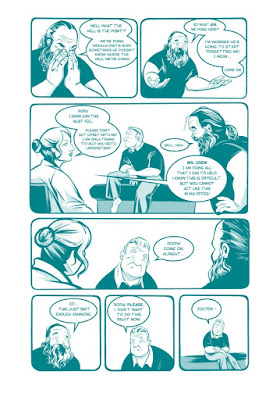