Paying The Land by Joe Sacco

“What is the worldview of a people who mumble no thanks or prayers, who take what they want from the land and pay it back with arsenic?” 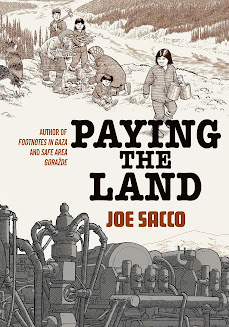 There’s a moment in Paying The Land (Jonathan Cape) when someone the author is interviewing is not happy to discover that the subject he is there to talk about will be turned into a comic. He complains that “it’s not a cartoon. It’s not a joke.” This comment spoke of his ignorance about the medium – graphic novels have for a long time, proved to be a powerful way of conveying even the most traumatic events in history as Art Spiegelman famously demonstrated with Maus (1991) about the Nazi persecution of the Jews. What the interviewee was no doubt also unaware of, is that he was talking to Joe Sacco, probably the most highly-regarded comics reporters in the business thanks to work such as Palestine (2002), Safe Area Gorazde (2000) and Footnotes in Gaza (2009). 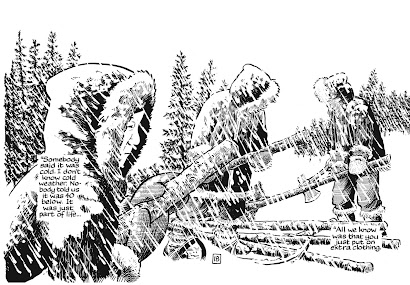 This latest book is set in the Canadian Northwest Territories where the Dene people have lived for centuries. It is a story of the relationship between people and land. The Dene have always lived off the land but now the modern age brings new needs from that land; that of oil, gas and diamonds. It’s about rights, ownership and natures balance, as well tradition and cultural heritage. There is a bigger story at work of course, questioning mankind’s place on earth, what our values are and about the inevitability of change. 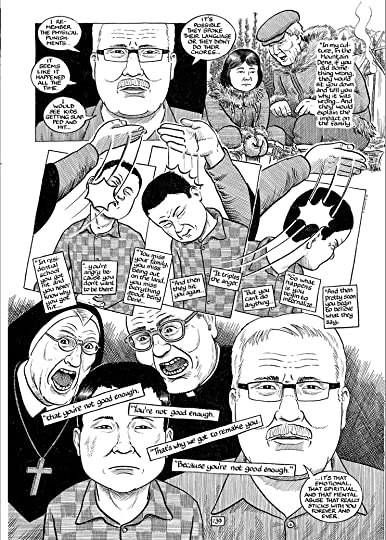 This is a dense book, filled with debates, legal technicalities and history, all hung heavily around personal accounts and viewpoints. The risk is that it could feel emotionally un-involving, but Sacco has also done an impressive job with the art, filling the pages with people and faces that all feel unique and carefully rendered (contrasted by his own familiar cartoony, blank spectacled self-representation). Sacco also shows impressive versatility, evocatively capturing the snowy landscape, animals, machinery and expert crowd compositions. The obvious care and craft put into the artwork is a poignant reminder of how the medium allows an artist to not only tell a story but portray its importance. 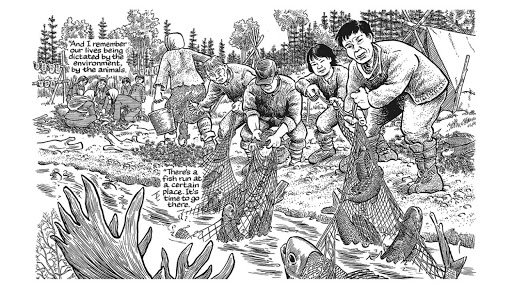